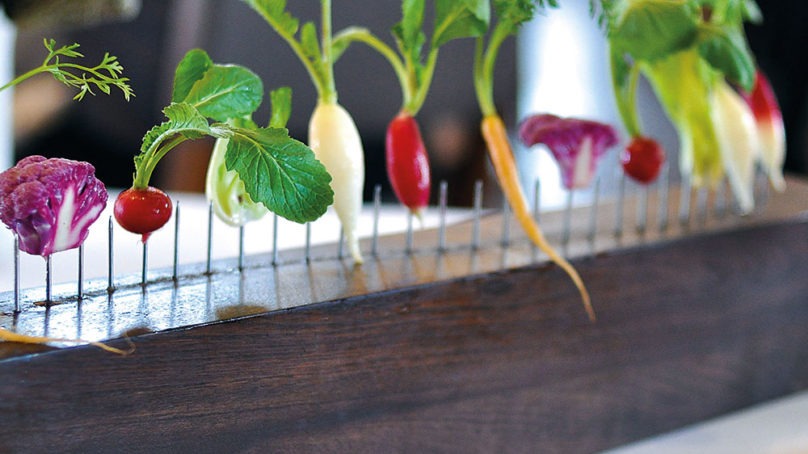 1. Shrinking commercial kitchen spaces
A longstanding theme in foodservice is that operators have to do more with less as the footprint for commercial kitchens continues to shrink. The real estate of any foodservice operation has always been highly prized as owners attempt to squeeze in more paying punters, while eating away at the space inhabited by the ‘cost-center’ kitchen. The industry has answered this trend by introducing more sophisticated, smaller and multi-functional equipment.
“This is a growing area of design concern. There is also a management component here of integration of production and design within the footprint,” warns US consultant Rudy Miick FCSI of The Miick Companies.

2. Instability in the casual dining scene
The casual dining sector, which had otherwise experienced vast growth globally over the last decade, now faces a catch-22 dilemma – scaling up (and taking on more debt as a result) in a saturated market is seemingly the only way to remain competitive, but many big brands, some previously deemed ‘too big to fail’, have fallen by the wayside in the last 12 months. There is no doubt it is tough out there.
The market remains alive though, thanks to automation, food delivery options and menu innovation, but recent high-profile closures, show nothing is sacred in casual dining. “While the market is expanding, success is not guaranteed,” says Dominic Allport, insights director, NPD Group.

3. Food delivery market soars
While many casual dining brands have failed to keep up with changing consumer habits, some individual operators have found opportunity and success amidst an evolving high-street landscape. Tech-driven food delivery brands such as UberEats, Amazon, Just Eat, Deliveroo, Seamless, Grubhub and Doordash are taking hold. UK fast-casual restaurant group Tortilla Mexican Grill has certainly capitalized on the burgeoning consumer demand for greater food delivery options from their favorite operators – the chain saw delivery sales double in 2017 compared to the previous year. “Delivery is the single biggest disruptor in the whole of the industry,” says Tortilla’s managing director Richard Morris. “The advent of delivery has immeasurably helped us at times of the day, such as evenings, when we weren’t getting much business. You reach a point when you realize delivery is here to stay and you can push against it or embrace it.”

4. An increased focus on energy efficiency
The last decade has seen the subject of energy efficiency turn from lip service and meaningless marketing speak on company brochures into a genuine hot button issue. Operators are now putting increasing pressure on their manufacturing partners to supply them with more sustainable machines that are kinder to the planet. Why? Because there are genuine cost-saving results to be had from installing machines that use less water, energy and chemicals. What is good for the environment can, it seems finally, also be good for the bottom line.

5. Pressure on supply chains
Worldwide political instability and uncertainty facing the future of trade deals (or a lack thereof) following both Brexit and NAFTA renegotiations has had an inevitable effect on global food supply chains. While political and economic tensions escalate in Europe, president Trump’s protectionist stance has seen the US impose unprecedented levies on Europe’s producers.
Supply chain fragility also hasn’t been helped by historic summer temperatures in 2018 with agriculture bearing the brunt and poor yields being the result. Rising food prices will inevitably follow. UK consultant Chris Stern FCSI says “all sectors” are being bent out of shape as climates change. “Suppliers who fail to be agile will struggle. Agility is an increasingly important factor.”
Supply chain failures can also happen to the biggest of brands – a chicken shortage led KFC to temporarily close more than 700 of its 900 UK restaurants.

6. How Millennials are shaping the future of foodservice
We have focused on the customer of the future in FCSI’s Foodservice Consultant and it is clear that Millennials and the groups that come after Generations Z and Alpha will change the market hugely. They are global, social, digital, mobile and visual. They want an experience – not just a meal – they care about the food quality and are happy to pay more for what they like. Sharing is key to the experience with social media being a huge factor in their decision-making.
Employers should take note of the staff members of the future – they expect nicer working environments and gender equality.
Melissa Abbot, vice president of culinary insight at Hartman Group in the US: “These younger generations are saying, ‘this is who we are, that’s enough – people need to be treated fairly and equitably’. I think there will be a lot of strife in the next decade, but hopefully the outcome will be a more equitable foodservice industry.”

7. Foodservice goes cashless
Countries in the east, most notably China, are leading the way when it comes to implementation of cashless technology. Consumers are quick to embrace new ways of paying, whether that is by app or phone.
Though cashless payments are common in most parts of the world, they only really taken off in Europe in the last couple of years. In China, meanwhile, this has been taken to a new level. As Zoe Bowley, managing director of Pizza Express explained to us recently, European countries are often slow to catch up. “We have just launched pay at table now and in a few years it will be the norm, but right now it is not in the customers’ psyche to pay on the app. In China you wouldn’t dream of signaling for the bill, it is all done through technology.”

8. Menus continue to get ‘optimized’ and more focused
This is a key strategy for any operator aiming to stay afloat in a world of unpredictable supply and rising prices. A steely focus on the menu is vital – keep it flexible to adapt to whatever produce is available, but maintain a constancy to retain the profile you want. It is often the case that smaller is better. “It is quality over quantity,” says John Turenne FCSI, president of Sustainable Food Systems in the US. “This allows for increased food quality without increasing labor costs.” It does make it harder to satisfy the preferences of a broad customer group, but an increasingly well-informed dining public can often appreciate a well-thought through menu with clear provenance of the food they are eating.

9. Emerging restaurant concepts: veg-centric, fine-casual
The top trend in gastronomy has long been an increasingly veg-centric menu and that is set to continue. This is in response to a public more aware of animal welfare, the environment and the importance of a balanced diet. This also makes sense for chefs who deal with fluctuating food prices and volatile supply levels, as Karen Malody FCSI, principal of Culinary Options in the US. “A restaurateur who has creative culinary skills can shift the menu to plant-based entrees, satisfy customers in doing so, and reap solid margins on their offerings.”
Another concept that is growing is the high-end going casual – top chefs including David Chang in New York City have opened fast food restaurants that focus on high quality – totally in tune with the emerging customer groups.

10. Food waste to dominate the headlines
A heavy focus on food waste in the wider industry across the world means that this has been a key priority in hospitality in recent words. Chef Dan Barber from Stone Barns at Blue Hill in the US cooks exclusively with food waste in his Wasted concept. When we spoke to him last year he said: “Our industrial food system is based on this philosophy of extraction – take more, waste more. It’s allowed us to cherry-pick certain coveted ingredients – say, a pork chop – while discarding others. That’s obviously not sustainable in the long run. The challenge for the future is to create a more holistic way of farming and eating, just as traditional food cultures did for hundreds of years.”
But as far as sustainability is concerned, expect a much harder focus on the issue of plastic waste in the near future. With operators banishing plastic straws, some like McDonald’s going even further by pledging to use only environmentally friendly materials by 2025, there have been real developments.
This is very much driven by consumer demand. Customers understand the problems around excess plastic waste and what it does to our environment and they can vote with their feet in a world of a proliferation of choice.

Noura Speaks to the Heart