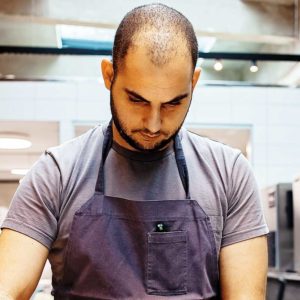 Qualifications
BS in Culinary Arts
Place of study
Les Roches, Switzerland
First job
Intern at D.O.M. Brazil
Motto
“Work hard, be open about learning and sharing and most importantly remain true to your roots.”
Ultimate goal in life
“Working hand in hand with Lebanese chefs to place Lebanon on the global food scene.”
Advice for the next generation
“Let your cooking be focused by the time, and place and season. Go out to nature and get inspired.”

Profile
Tarek Alameddine, originally from Aley, Chouf region, first turned to cooking as an outlet for stress and as a way of enjoying food, but it was only when he was majoring in Business that Almeddine realized he should be considering cooking as a career. His passion took him to Les Roches, via the Royal Academy of Culinary Arts Jordan. Soon he began planning his internship, which he was determined to do at D.O.M, with the famous Brazilian chef, Alex Atalla. Almeddine applied twice to Noma because he wanted to discover more about the Danish chef, René Redzepi’s vision. Still at Noma, he is currently toying with the idea of coming back to Lebanon and opening a restaurant unlike anything yet experienced in the country.