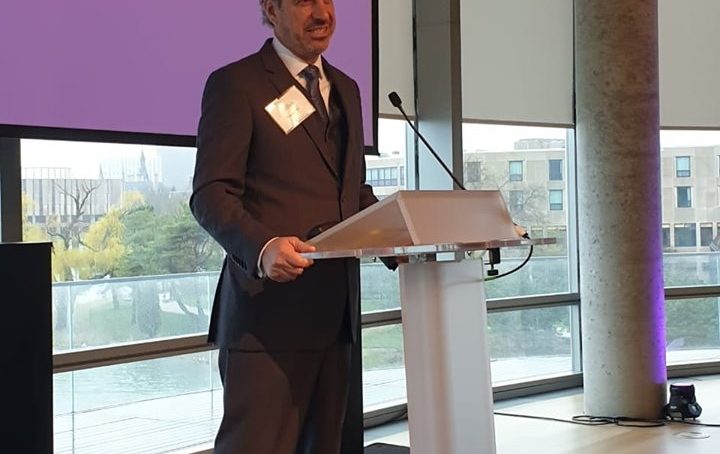 The graduating class of Notre-Dame Collège of Jamhour in Lebanon had a surprise announcement from alumni and guest speaker Selim A. Bassoul, retired Chairman and CEO of The Middleby Corporation, an American publicly traded commercial and residential cooking and industrial process equipment company based in Elgin, Illinois. The company manufactures commercial cooking equipment, industrial processing equipment, and residential appliances.

During the commencement speech, Mr. Bassoul had a more unconventional take on his educational endeavors, which was quite different than what the graduates were used to hearing.

“This school, which I never liked, which I really hated, and which has welcomed me for 13 years, honors me today. What a paradox! I never liked Jamhour because I was a turbulent, dyslexic, deficient, hyperactive, mediocre, not to say catastrophic, student. Coming from a modest family, surrounded by studious and rich classmates, I suffered a lot in this school. Socially maladapted to the needs and demands of the school, I accumulated failures, referrals and disappointments. But despite this dark picture, there are people here who believed in me.”

Until my arrival in ‘Terminale’, I was the only one in Jamhour to have failed the ‘bac’ (Lebanese official exam)! I broke the record. The war had just begun and, having no access to financial aid and no official diploma, my destiny seemed doomed. However, this student who had failed in every respect had completely changed the equation. I managed to turn a complete failure into outstanding professional success. Basically, there wasn’t a student worse off than I was: if I made it, you can make it. Think out of the box, be creative, be contrarian, be bold, take risks, fail and stand up, fail again and stand up again,” he said.

Mr. Bassoul encouraged the young graduates to travel and discover new horizons, but never forget their roots. As a Lebanese he said, “My experience has taught me that the Lebanese can leave Lebanon, but Lebanon will never leave the heart of the Lebanese. I traveled all over the world, from China to the USA … 40 years later, I never forgot where I came from.”

Addressing the President of the Republic of Lebanon, Michel Aoun, who was also in attendance, he said, “Dear President, you are for us the human values ​​we hold dear. You endured a lot in your life: after an exile of fifteen years, you returned to the country to continue your fight in the service of a sovereign and free Lebanon.”

Mr. Bassoul also spoke about the importance of giving back to one’s community. “I remember that my friend Mohamed Ali Clay, the great boxer, had told me one day: ‘Service to others is the price of your room here on earth,’” which is one of the reasons why he founded The Bassoul Dignity Foundation which helps thousands of people around the world, especially in the Middle East.

RELATED CONTENT  Hotel Owners in Lebanon: “We are revolutionaries”

Then, to the amazement of the attendees, staff and students, he concluded his speech by saying, “To this school that I hated so much, but, deep down I love so much, I offer a million dollars. This donation, which will be added to the College’s Endowment Fund, will help many students and parents in need in the years to come. In addition, I share your forward-thinking vision of founding an Academy of Robotics and Artificial Intelligence at the school. I am fully at your disposal my expertise and my relationships in this field. You can continue to count on me to implement this pilot project, the first in Lebanon, serving the youth of our country.”

Mr. Bassoul has lead The Middleby Corporation to be one of the best performing public companies over the past several years. He became Chief Operating Officer of The Middleby Corporation in 1999 and was named Chief Executive in 2000 and Chairman of the Board in 2004. Under his leadership the company has added a dozen acquisitions to grow Middleby’s presence to a market leader in the industries they serve and quadruple company sales in a five year period.

Prior to joining The Middleby Corporation Mr. Bassoul worked for eight years in commercial food equipment for Premark, Inc., a unit of Illinois Tool Works, as Director of Marketing, General Manager of the Cook-Chill division and Vice President of Sales for the Vulcan Cooking Division. Before entering the foodservice industry, Mr. Bassoul worked in the healthcare industry for eight years for American Hospital Supply and Baxter Healthcare in various positions including mergers and acquisitions, corporate planning and regional director in the Middle East and Africa.

Mr. Bassoul started his career at Ernst & Young in the Middle East and then moved to the United States to continue his postgraduate education at the Northwestern University Kellogg School of Management where he earned his M.B.A. in finance and marketing and a certificate in Accounting. Before coming to the U.S. Mr. Bassoul attended the American University of Beirut where he received a B.A. in Business Administration with Distinction and was the recipient of the David Dodge Scholar Award. Through high school he was educated by the Jesuits at Notre Dame de Jamhour in Beirut.