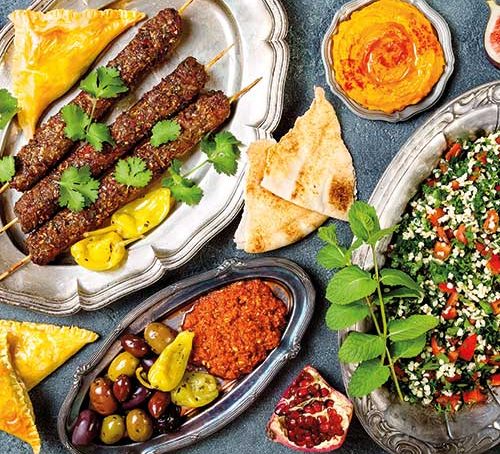 Geographically, the region of the Levant spreads from Egypt to Turkey, and encompasses all the countries in between. In other words, it refers to the oriental coast of the Mediterranean Sea. In truth, all these areas share a wide variety of dishes, from mezze such as hummus and muttabal to traditional dishes like foul and kebab. The reasons behind these common tastes are mostly historical: a tradition of exodus and travels drove people to settle in neighboring communities and share their culinary heritage. Afterward, the long Ottoman rule deepened what had become a regional identity. There are hundreds of examples, such as the Kebab Kheshkhash, a signature dish from Aleppo that initially came from Turkey and the Egyptian mouloukiyeh. According to Barbara Massaad, cookbook author and president of Slow Food Beirut, the Levantine cuisine can be distinguished by the fact that “it shares common values, techniques and recipes, while not being from a specific country or place”. But for culinary and hospitality management consultant Dima Al-Chaar, it’s important to stress that each area retains its own specificities: “It’s true that it all falls into the Levant region; however each of those countries has its own cuisine character, tastes, flavors and recipes. And this is due to the geographical location, the type of soil, weather and the type of ingredients that are grown in each of those countries.” However, a local take can sometimes make all the difference. “Take kebbe,” explains Reem Azoury, executive chef and partner at Maryool, Meat The Fish, Skirt and BySkirt. “It is made in all of the Levantine countries, yet it is very different in shape and flavors, with examples ranging from Kebbe Zghertewiyyeh in Nothern Lebanon, to Zangaliyyey in Aleppo and Kebbet Mosul in Iraq. So it’s basically the same, but different.”

Does Levantine mean Lebanese?
So why is Levantine cuisine in many ways a new concept? Why, if we ask people in Europe or the US, will most of them seem unsure of what it means, even though they’ve all tried hummus or a falafel sandwich at least once in their life? It all comes down to the choice of words: while ‘Levantine’ remains a mystery, people are familiar with Lebanese cuisine, which has been the region’s culinary standard-bearer for a long time. This prompts the question why Lebanese and not Syrian, Egyptian or Turkish cuisine? The Lebanese recipe for success has multiple layers which has its roots in the tradition of migration. Millions of Lebanese have been moving around and settled all over the globe for over a century now, pushed out by conflict or simply drawn overseas by business opportunities. They have become everyone’s familiar neighbor, whether in Australia, Senegal, France or Brazil; something that Massaad has experienced firsthand. “One way to stay attached to our roots was to promote the Lebanese cuisine. I myself come from a family that immigrated to the US. We opened a Lebanese restaurant in Florida to showcase our good food and share the best of our culture.” Their flair for business has also contributed to the Lebanese’s reputation. If not gold, what they touch usually turns into a successful venture and the restaurant business is no exception.

A happy medium between cheap and chic?
So wherever you are in the world, you’ll always find a Lebanese eatery nearby, mostly in two specific segments: high-end establishments and inexpensive delicatessens serving sandwiches and mezze on the go. The latter have become one of the edible symbols of globalization, alongside Chinese restaurants, sushi places and fast-food joints. While most Lebanese establishments are known for their famous dishes rather than their ‘old school’ concepts, some are dusting down their faded photos of Baalback and spring-cleaning both their menus and decor. The refined dining segment is experiencing new flavors, mixing Middle Eastern ingredients with foreign dishes. Michelin-starred Chef Alan Geaam, who is redefining the genre with bold and daring recipes, such as foie gras with halawa or lobster and arak, is a telling example. He stresses, however, that his cuisine is “neither Lebanese, nor Levantine”. Instead, he is one of the main advocates for another take on traditional cuisine and describes his dishes as “fine dining with a Levantine twist”. The lower-end segment, with fast-food joints selling falafel, shawarma or kebabs, is not to be outdone either. Street food now chimes with quality and health, with trendy ‘hummus bars’ and shawarmas featuring cheddar and onion chutney. Falafel joints are also making a name for themselves, supported by the vegetarian global trend. At the same time, newcomers are opening mid-range restaurants, finding middle ground between the chic and cheap traditional establishments. And chefs – usually considered as ordinary cooks since the traditional recipes are set in stone – are now showcasing their creativity in the ‘fine casual’ segment. “We as Arabs have stood still with the recipes that we have inherited from our families,” laments caterer and consultant Hussein Hadid. But times seem to be changing, with more and more restaurants in Western countries offering a new take on tradition, enhancing recipes with unusual ingredients or influences.

Lobbying for your own delicacies
But the Lebanese face competition, with other types of regional cuisines now seeking their share of the baklava. Syrian, Palestinian, Egyptian and Turkish restaurants at home and abroad have started to promote regional dishes as their own alongside their local specialties. Armenian cuisine – which has always had its small eateries targeting the diaspora – has also entered the contest, although geographically its membership in the Levant club is subject to discussion. Culturally, however, it wins its legitimacy hands down, with Middle Eastern cooks having incorporated Armenian recipes and flavors in their pots for many years, thanks to the large Armenian community found across the region.

Choosing the right word
Now that we’ve clarified that what’s on the plate is, roughly, the same; how should these eateries be described and titled? There are four different schools of thought on the matter. They can stick to the ‘Lebanese’ trademark that has a proven track record of success or decide to be more specific and go with the Syrian, Egyptian, Armenian or Palestinian label. Syrian cuisine is certainly in the spotlight right now, promoted by the massive influx of war migrants. “Levantine cuisine is a mish mash of foods,” explains Azouri. She goes on, however, to express her support for the second option, saying “Individual countries would prefer to be represented on their own merit.” A legitimate acknowledgment, according to Chef Dima Al-Chaar, who adds, “Each of those cuisines should stand on its own and be referred to as Syrian, Lebanese or Palestinian cuisine. (…) The mission of our generation is to educate Westerners about the differences between those cuisines, especially since nowadays we are seeing more and more rising young chefs from each of those regions, so we need to let each of them speak their own language.”

So how about ‘Levantine’? The word could be considered a happy medium between the neutral and the contentious since it refers to a more specific area, but doesn’t relate to the ‘Arab’ notion, which can have a negative connotation. ‘Levantine’ also has the vaguely exotic vibe of an area you can’t really locate, recalling positive elements related to history, art and tales of travel from the Ottoman era. For its supporters, like caterer and consultant Hussein Hadid, it could be an opportunity. “I personally always felt that Syria, Jordan and Palestine were never well represented in the outside world, so the ‘Levantine’ concept may give greater exposure to these lesser known countries,” he said. Massaad has doubts, however. “It has been used to market a restaurant to broaden target groups and thus not been branded to a specific type of cuisine. The question we should ask ourselves is: is that a strength or a weakness?” she asked. Azouri, meanwhile, believes that the term shows how Westerners have a tendency to lump regional cuisines together without distinction. “The reverse would not apply; there is no European cuisine or restaurants,” she said. “French, Italian and Spanish chefs would not refer to their own cuisine as ‘European’ or ‘White’, they would insist that it’s French food, Italian Food, Spanish food… The same should be true of Lebanese food, Iraqi cuisine, Syrian cuisine or Palestinian food.”

Despite the controversy and regardless of the word chosen, there is indeed a new trend of Middle Eastern eateries spicing up their act. “We’re finally seeing people daring to ‘gastronomize’ our cuisine,” notes Geaam. The trend also represents part of a global tidal wave promoting healthy and seasonal eating; new criteria that seems to fit Middle Eastern food like a glove.

While ‘Levantine’ remains a mystery, people are familiar with Lebanese cuisine, which has been the region’s culinary standard-bearer for a long time 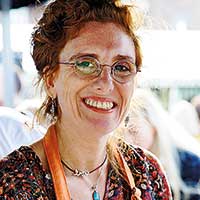 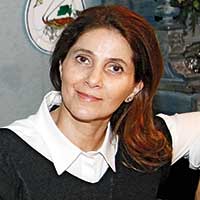 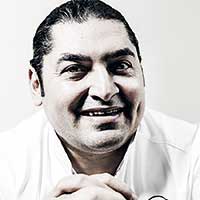 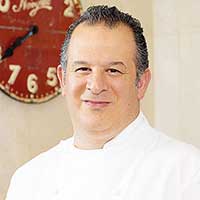