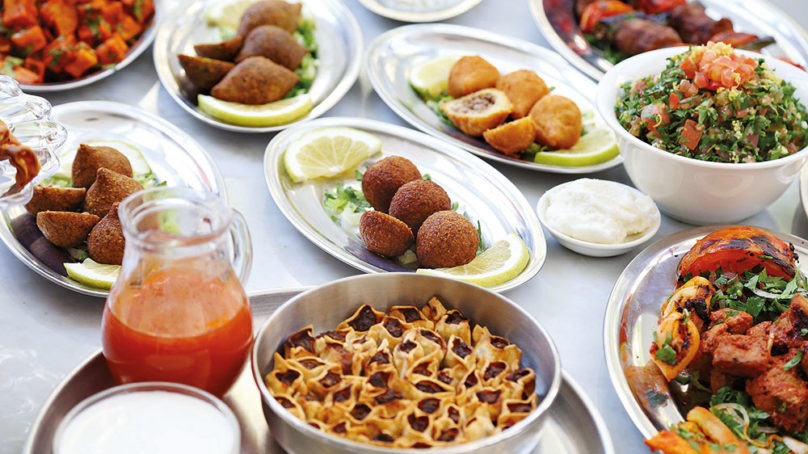 From Mayrig to Mamig and from Lusin to Batchig to Nour, a wave of the finest restaurants in the Middle East, serving Armenian delicacies, is taking the region by storm and gathering a cult-like following. Even if the cuisine’s true origins remain a subject of debate, what’s beyond a doubt is that the Middle East is in love with Armenian food and the cuisine isn’t so much the traditional dishes of one country, but rather the cooking techniques of an entire diaspora

“Be careful not to confuse Middle Eastern Armenian food with that of the Caucasus,” cautioned culinary expert and cookbook author, Anahid Doniguian. “Armenian winters are harsh, so cooks tend to prepare food during the summer and store it to survive the winter. We mostly use fresh seasonal ingredients in the Levant, so it’s quite different.”

Doniguian is the concept creator of Lusin, the first Armenian restaurant in Saudi Arabia, which has four branches located across the Kingdom. The Saudi owners first decided to bring the cuisine to the country in 2009, when they realized that tourists were frequenting Armenian restaurants in Lebanon.

“Almost the entire menu (95 percent) is Armenian, except for a few dishes which we’ve ‘Armenized’,” she explained.

“The food is the same at all of the restaurants because we’re using identical equipment and recipes, serving dishes that are known and loved by all. Most important is that the presentation should complement the flavors.”
Doniguian’s aim has been to create a link between the modern world and traditional food by updating and refining the look.

“We can cook our basic dishes but make them look more appealing, by adding more ingredients that were not available or accepted before,” she noted. “There are 101 ideas; for instance, vospov keufteh – a vegan appetizer made of red lentils. Instead of using my palms to make the patties, I plate it, using an ice cream scooper and serve with a little bit of parsley and red pepper flakes on top. I don’t want to deviate from the basic recipe, but I want to modernize the look.”

Serving much more than simply street food, which is what the cuisine was typically associated with in Lebanon, Aline Kamakian, author and founder of Mayrig and Batchig restaurants, started what has been described by many as an Armenian culinary revolution. Today, she is known for removing the stigma attached to Armenian cuisine and telling the story of a culture through food.

“There were many restaurants with Armenian owners, but not serving Armenian food, until Mayrig opened in 2003,” she said.

“Mayrig is known as an authentic Armenian restaurant. Dishes might be similar to those of the region, because we share the same land and ingredients, but everyone prepares them differently. Our strength is that we have Syrian, Lebanese, Iranian, Iraqi and the Caucasian Armenian influences all coming together. This is the richness of Armenian food. What I’m trying to do is gather all of these recipes that are authentically ours, despite the large area of influence.”

Kamakian emphasizes that authentic doesn’t mean “frozen in time”. “Authentic is when you adapt your reality to the existing circumstances,” she explained. “This is how we update our culture and hold on to it.”

Current projects include a Mayrig restaurant in Armenia, as well as a culinary school that will educate a new crop of chefs interested in the cuisine. “We don’t have a trained group of chefs to take over a restaurant because it was our mothers who safeguarded our food traditions,” she commented. “When I opened the restaurant 15 years ago, there were no chefs. The only ones that were familiar with our culture were our moms. This is why I wrote the book – as a tribute to all Armenian mothers who kept the knowledge and relayed it to their daughters. Things are different now; the legacy that we’ve protected has to be passed on. My job is to give it to the next generation in a structured way. Their job is to evolve it.”

Kamakian believes that Armenian food is currently riding a wave, with an elevated version of street food set to be the next cycle. “There will be a lot more Batchig-style trattorias in common areas, next to movie theaters, for example, and where there is a lot of footfall. I’ve incorporated the street food element within the restaurant, like the woodfired oven serving ‘beureg’ and ‘lahmadjun’. I’ve upgraded street food.”

For the founder of the Armenian Federation of Chefs and the only Armenian certified international master chef, TV personality, author and culinary artist, Zarmig Halladjian, believes that Armenian cuisine is far more sophisticated than it used to be, with creative chefs “adding new chapters to traditional cooking”. Eight years ago, Halladjian movedt to Doha from her native Lebanon and set up Mamig, a Lebanese-Armenian fine-dining restaurant at Katara Cultural Village. The restaurant serves 3,000 customers a day with a staff of 150. Her worldwide travels, together with her constant efforts to educate, as well as feed diners, have established Halladjian as an ambassador of Armenian cuisine. “The cuisine is focused on fresh vegetables, such as eggplant, onions and tomatoes, and fruit, like peaches, apricots, apples and pomegranate, which is the symbol of Armenia,” she explained. She added that the flavor of the food relies on the freshness and quality of the ingredients used, rather than spices. “Of course, a variety of spices is used, but always in moderation,” she added. “In short, Armenian cuisine is inventive, adaptable, frugal and eminently exquisite.”

An Armenian street food concept that made the leap into fine dining, Ichkhanian is a traditional bakery, located in Beirut and Zalka that has been operating for nearly 70 years. Founder, Yeghia Ichkhanian’s ultimate dream was to introduce traditional Armenian culinary arts to Beirut in 1946. That aim was passed on to his grandson, Elie Ichkhanian, who continues to make delicious ‘lahmadjuns’ and ‘tahinov hatz’ with the same enthusiasm as his grandfather. “There is no secret recipe, just a traditional pastry made with a lot of love, sizzled with a squeeze of lemon, and rolled to perfection for an unforgettable taste,” he said.

This year, Ichkhanian took a bold new step by opening Nour – Fine Armenian Cuisine in Beirut to complement their original concept. “Street food should carry its quintessential simplicity into the fine-dine space,” said Ichkhanian. “The crossover was just waiting to happen. For too long, consumers have ignored this segment, but I believe the transition is easy and was inevitably going to take place.”

When asked what the next 70 years could bring, Ichkahnian responded by saying, “We need some of these new young chefs to take a risk and bring the classics into the 21st century. The cuisine should be as accessible as Italian or Japanese food, instead of only concentrated in the Middle East. I’ve yet to find a restaurant outside our region that compares with home cooking, but that’s true of any ethnic cuisine, isn’t it?”

5 ARMENIAN DISHES TO SEEK OUT IN THE ME

• Ghapama, a stuffed pumpkin dish with boiled rice and dried fruits.
• Eech, a bulgur salad, similar to tabbouleh, made with olive oil, onions, lemon, mint, basil, parsley, and sautéed tomatoes.
• Sou borek, a lasagna-like dish, in which the dough is stuffed with cheese filling.
• Manti, boat-shaped dumplings filled with meat and served in chicken broth, with a good helping of yogurt.
• Tahinov hatz, a flatbread filled with layers of tahini (sesame paste), sugar and sometimes cinnamon.
• Urfa kebab, minced beef, skewered with eggplant and spiced tomatoes. The name ‘urfa’ refers to the city in southeastern Turkey, in which Armenians were a native population.

The Shogun Expands Its Reach