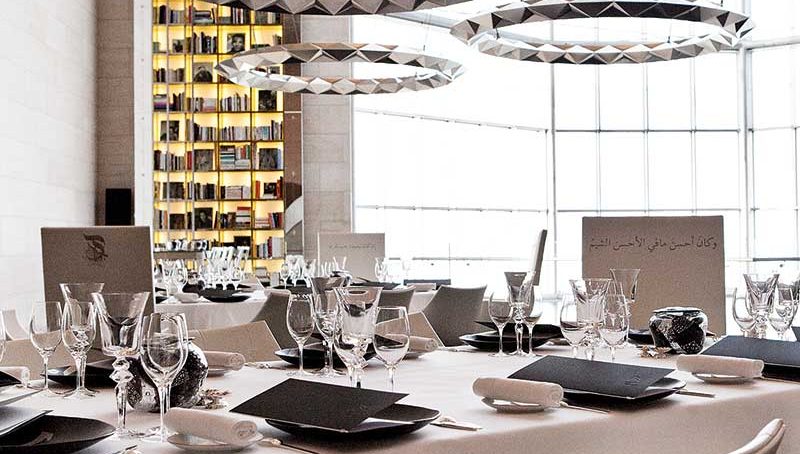 Damien Leroux has led operations at IDAM, Michelin-starred chef Alain Ducasse’s award-winning restaurant situated at the top of the iconic Museum of Islamic Art in Doha, for almost two years. Here, the executive chef talks to HN about the ingredients he’s discovered since arriving in Qatar, the inspiration that his surroundings are generating and his commitment to supporting local producers

What were your earliest experiences of cooking?
My parents had a restaurant in Chartres, not far from Paris, and since we also lived above it, food was at the heart of everything during my childhood. The cuisine my father created was simple, but very authentic French dishes, using traditional ingredients, such as cream and butter. I wasn’t overly enthusiastic about school, but really enjoyed the kitchen environment, so felt that cooking could be the path for me.
When I was 16, I had the opportunity to go and work in La Turbie, in the south of France, at L’Hostelliere Jerome with Chef Bruno Cirino (2 Michelin Stars). The menu featured Mediterranean cuisine, which was the opposite of what my father had been making; almost overnight, I had to switch from butter to olive oil, and move from long, complicated recipes to more spontaneous dishes. I loved the food I’d learnt to cook back home, but suddenly I was confronted with a new vision. I spent two amazing years there, discovering many, many new products, tastes and ways of cooking. I learnt that provided you have the right ingredients and a few spices, the creative work is largely straightforward.

What have you learnt in your time working for Alain Ducasse?
One of the things Alain Ducasse always tells us is that the more you travel, the more you realise how much you still have to learn as a chef. He encourages us to take inspiration from every country we visit, picking up new flavors and untried methods of cooking along the way. When working for him in Provence at La Bastide de Moustiers, we offered a small menu that was changed daily, rather than an à la carte one, and featured ingredients that were all from the garden. This focus on working with simple, but perfectly matured ingredients was extremely enlightening.
Another important point in my career came when I moved to London from Monaco to work with Gordon Ramsay and Clare Smyth for the opening of the Dorchester. This marked a really important transition in hospitality for me since it taught me about managing a restaurant from a business viewpoint.

What have you discovered about Qatar’s culinary potential while working here?
When I arrived in Doha, it was like a huge door opened on Africa, Europe and Asia combined, bringing all their spices, flavors and methods of cooking together in one place, which is really exciting. We have people from 14 countries on our team, for example, each bringing with them different ingredients and ways of using them, so there’s plenty to discover. Every day, I ask a member of staff to come up with something new for me to try – I enjoy being surprised in this way! There’s lots to learn outside too, whether it’s from eating out or a simple walk through the souk. This cultural mix and its impact on food is one of the truly fabulous things about Qatar.

What new ingredients have you identified?
The first that springs to mind is loomi, a type of dried lemon found in both black and yellow varieties. The lemons are traditionally dried on the rooftop to preserve them. I love using them when making a broth or in a sauce served with fish. I also discovered a local truffle – the fagga variety, which is also found in north African countries – last year. I learned about this delicacy from local farmers, who told me where the truffles could be found in the rocky, northern part of Qatar. I asked the farmers to show me how they prep and cook the truffles and then decided to launch my first one-day-only menu featuring them. People told me I was crazy and that we wouldn’t find enough to create the dishes I had in mind, but we persevered and they were absolutely delicious! I now plan to do a menu using the local truffles again this year.

What local produce are you working with in Qatar?
Qatar’s cooking heritage encompasses both fish, from the time when the fishermen used to dive for pearls, and the Bedouins who lived in the desert and ate more meat. The local fish, which includes red mullet, kingfish, red snapper, seabream and blue crab, is excellent in quality, and I work closely with the fishermen to ensure they know what I want.
The same is true for the butchers – it’s important to let them know what I’m looking for – and they provide me with some superb lamb and camel meat. I’m a firm believer in supporting the local farmers and this is especially true when it comes to those growing vegetables. Right now, I’m working closely with a number of producers who are just beginning to implement organic farming methods, which is very exciting. They’re really keen to obtain the consistent quality we require and are very good listeners. My advice was to start small and progress step by step rather than try to create a full garden, and that’s what they’ve done. The results so far are amazing, with local farmers now producing an impressive range of vegetables that includes eggplant, tomatoes, zucchini, cucumbers, peppers and chilis – most of the basics, in fact. I’ll add a few international ingredients from France, Lebanon, Turkey, Iran and India, for example, where necessary, but I try to use as much local produce as I can.

What can you tell us about the dishes you’re creating?
Our cuisine is Mediterranean cuisine with a Middle Eastern twist. We often combine French and Qatari delicacies, such as camel served with fois gras, to celebrate both countries. There’s no greater satisfaction than when Qatari diners come up to me and say that the dish they’ve eaten takes them back to the food they enjoyed in their childhood.
The food is also inspired by our location – this amazing space that we occupy, the light, the shapes and the perspectives of the Museum of Islamic Art. One of the desserts – IDAM Chocolate – is shaped like the top of the museum, while another, which is a pastry with raspberry and horseflower, is inspired by the water feature on the ground floor.
At Alain Ducasse, we recognize that location is a crucial factor when creating our menus. Diners want to feel part of the local scene when eating out and don’t want to find the same dishes in Monaco, London and Paris, for example. We are focused on adapting, giving the dishes a local touch and ensuring diners really enjoy the food. Seasonality is of course always important in Alain Ducasse restaurants, so we change the menu four times a year.

Have you felt it necessary to adapt your cuisine to accommodate the current vegan trend?
I’m actually very familiar with vegan cuisine since my wife is a vegan chef! Veganism is actually an old concept; we have a book in our library featuring a vegan recipe that dates back to the 16th century. We certainly recognize the rising demand for vegan and vegetarian dishes, which is why every menu at an Alain Ducasse restaurant features at least one dish containing vegetables and cereals, combined with herbs and spices, and is dairy and gluten-free. In fact, Alain Ducasse was very much ahead of the game in this field, since, when he opened his first restaurant in Monaco around 30 years ago, he created a garden menu that contained no animal products.
My wife’s cooking has opened many new doors and provided me with exciting ideas on how to create different taste and textures, such as vegan cheese using almonds and cashew nuts. It’s amazing what can be done with these ingredients and has undoubtedly ushered in a new way to eat. Our role is to inspire people to eat better every day and this way of cooking is certainly playing a big part in achieving this. 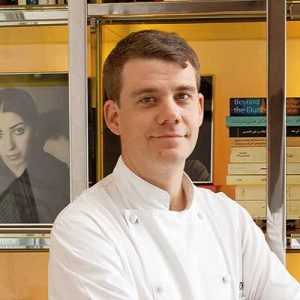 Damien Leroux
Executive Chef, IDAM
“One of the things Alain Ducasse always tells us is that the more you travel, the more you realise how much you still have to learn as a chef”