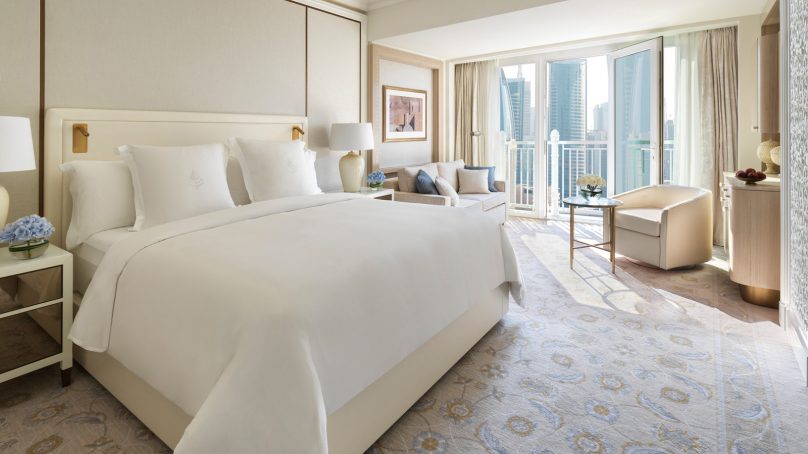 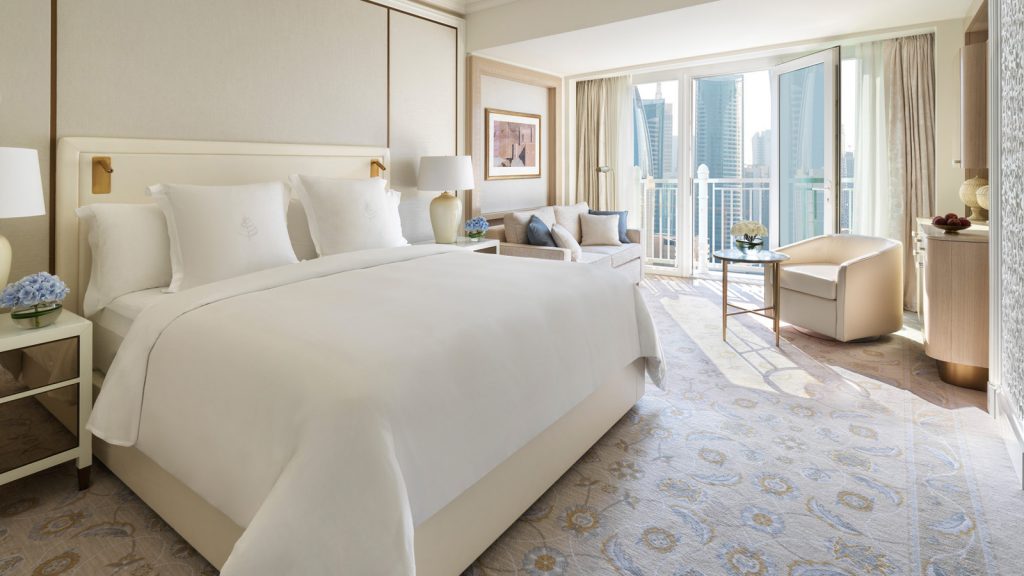 Set along the beachfront of the Arabian Gulf, and in close proximity to the cultural landmarks of Doha, the vast renovations span an entire redesign of the hotel’s bedrooms, suites, guest floors, Lobby and dining outlets. The public areas have adopted a range of greens to evoke the feeling of a garden and new life.

In addition to offering Hermès amenities in all suites, and state-of-the-art technology, the hotel will continue to pay homage to Qatari heritage with features such as mother of pearl inlay, while complementing a contemporary rejuvenation.

The redesigned rooms follow a soothing spectrum of blues and beiges reflecting the colors of Doha, where the sky, sea, sand and earth come together and impart a more residential feeling. The rooms are equipped with energy-efficient technologies, featuring automated curtains and lighting systems as well as temperature management preservation technology within the newly installed windows.

“PYR has transformed this glorious seafront property into a refreshed and vibrant hotspot, while keeping true to its Qatari roots,” states Jeff Rednour, general manager. “Four Seasons Hotel Doha has been at the forefront of Qatari hospitality since its inception, and the complete regeneration of this beloved property highlights the history and heritage behind it, while adapting to today’s guest expectations.”

The hotel also introduces diverse dining and lounge concepts. Arabica, located on the ground floor of the Hotel, returns with a contemporary new look and coffee and dessert bar. Bold and neutral in its color scheme, the space houses marble furniture that echoes the octagonal shape of the conservatory. This will be the destination of bespoke coffee, specializing in single origin beans and a selection of re-imagined takes on childhood favorites, including an ever-changing variety of doughnuts and cupcakes.

Also refurbished is the Seasons Tea Lounge, which is luxuriously comfortable and exudes Parisian chic by blending classical and modern forms. Featuring a French Winter Garden that opens up into a terrace, Seasons Tea Lounge brings the outdoors inside with strong shades of green that are highlighted by a commanding hand-blown glass chandelier. Seasons Tea Lounge serves a carefully-crafted menu of French delicacies with table side service that evokes the grandeur of a Parisian café.

The re-opening of the hotel also welcomes The Study, an outdoor bar and lounge concept, on a terrace adjoining the Library and Cigar Lounge.

The completion of further enhancements will be announced later in 2020, and will include the refurbishment of a space previously held by Il Teatro, which will relaunch with a brand new concept by a celebrated Michelin star chef.