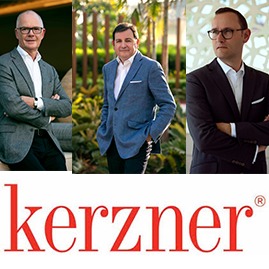 Michael Wale, who has held the role of Chief Executive Officer since February 2018, has been invited to join the Board of Directors of Kerzner International and Philippe Zuber, the current Chief Operating Officer, will be leading the Company as Chief Executive Officer.  Finally, Michel Checoury, who has held the position of Chief Financial Officer since October 2018, will be adding Chief Administrative Officer to his role.

Wale made a significant impact in the time he led the business, including further strategic expansion and success of the current portfolio, continued innovation and improving colleague engagement.  During Wale’s tenure, he introduced new resorts that truly redefine each destination, opening two unique resorts in Rwanda, One&Only Nyungwe House and One&Only Gorilla’s Nest, and Atlantis Sanya, China. He accelerated growth by introducing One&Only Private Homes at exclusive destinations around the world and signed another five confirmed resorts in the pipeline.  Wale also ensured the success of the existing portfolio, with Kerzner resorts leading in RGI and ADR against their competitive sets. With a focus on technology, the Company introduced new websites for all brands, developed the Kerzner Integrated Platform to streamline connectivity with our travel partners, as well as developing an advanced guest profiling system. Wale’s leadership has always included a major focus on talent development and at Kerzner, he improved colleague engagement for the company and built a thriving culture of continued development for the leaders of the future.

Kerzner further announced the appointment of their new CEO, Philippe Zuber.  He originally joined Kerzner International in December 2015 as President and COO,  One&Only Resorts, where he successfully launched the evolution of One&Only beyond award-winning beach resorts, to include Nature Resorts, Urban Resorts and One&Only Private Homes. In addition, Zuber introduced the new service philosophy of “We Create Joy” for both guests and colleagues, building a new culture at One&Only.  He also led the successful multi-million-dollar rebirth of the iconic One&Only Le Saint Géran in Mauritius and introduced one of the first exclusive communities for guests to own a piece of One&Only in the legendary destination.  He was also responsible for completely redefining the resort well-being experience with the introduction of an exclusive global partnership with leading health wellness and beauty expert brand, Chenot.

Most recently, he has served as the Chief Operating Officer for Kerzner International, also overseeing Mazagan Beach & Golf Resort and the iconic Atlantis brand globally.  A leading brand ambassador, he has been focused on the guest experience across the Company—amazing experiences and everlasting memories, championing continued innovation across the collection and making key investments to continue to elevate the guest experience which resulted in Kerzner being a leader in guest satisfaction with continued increase of guest satisfaction year over year.  He has also been integral to the continued strategic growth of the Company.  As Kerzner has always been a pioneer in culinary experiences, Zuber has also focused on the portfolio’s food and beverage concepts, leading innovation of new destination dining experiences, entertainment and partnerships with world-renowned chefs.

Finally, Michel Checoury, who joined Kerzner International as Chief Financial Officer in October 2018, will be taking on the additional responsibility of Chief Administrative Officer.  Checoury has successfully driven strong financial results for the Company and has introduced elevated financial discipline across the business and supported the expansion of Kerzner’s global footprint.  In addition to overseeing Finance, Checoury will lead Development, Technical Services, Information Technology and Legal, reporting directly to Philippe Zuber.  An industry veteran, he has extensive luxury experience across the globe including Aman, Mandarin Oriental, Jumeirah, InterContinental, Starwood and Euro Disney.