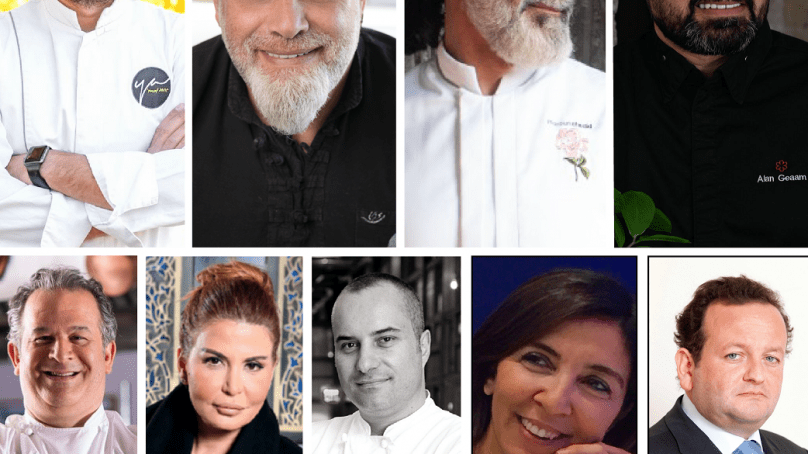 Powered by Hospitality News Middle East and funded by the USAID Lebanon Enterprise development (LED) project, Hospitality News Talks held its 11th virtual roundtable on April 22 — “Rethinking the future of Lebanese cuisine.” The online session, one of 12 such talks moderated by Hodema consulting services, welcomed a panel of renowned Lebanese chefs, restaurateurs and entrepreneurs to share their views on how Lebanese cuisine can evolve.

Hayek spoke about the passion behind her world-renowned Em Sherif brand, which was founded 12 years ago. “Authenticity lies at the heart of the heart. We offer a full Lebanese experience – music, culture and traditional food. Em Sherif is present in more than 10 countries, and next year we will open at Harrods in London and in Monaco.”

She added that Lebanese cuisine is rich because of the variety of ingredients available and the balance of flavors. “The Mediterranean diet is very healthy and trendy. Sumac, garlic, olive oil and sesame paste are just a few of the nutritious components.”

Hayek said that chefs ought to have room to add their touch to Lebanese dishes. “Experimenting is very important, especially for chefs.”

Chedid said that the beauty of Lebanese cuisines lies in the fact that it is generous. “Our dishes yearn to be shared, and this idea of enjoying food together should always be spoken about and celebrated. The cuisine is all about evoking memories.”

The decorated chef said that Lebanese food can be made more contemporary, but it is imperative to first understand the basics and how it should taste. “Culture and education play a huge role. You must understand the origins of a dish, its specificities and such, to then upgrade and reinvent it. We should always have a reference. While the presentation, texture and other elements can be adapted, we mustn’t stray from the identity of our cuisine.”

He added that Lebanese food can be tailored to suit the needs and demands of overseas markets and that knowledge of other cuisines and cooking techniques is essential to growth.

Michelin-star chef Geaam, a Tripoli native who left Lebanon 22 years ago and owns four restaurants in France, discussed his businesses and why Lebanese cuisine is so popular. “Although I have traveled the world, Lebanon offers the best cuisine. Nothing compares to Lebanon when it comes to food. Every Lebanese mother is worthy of a Michelin star.”

The renowned chef added that the unpredictable climate of France creates a problem in terms of raw ingredients. “We are forced to reinvent certain Lebanese recipes because the ingredients aren’t always available. It is difficult to stay 100 percent true to Lebanese recipes.”

He added that there is heavy competition in France in terms of Lebanese restaurants. “Some are posing as Lebanese restaurants while they are actually owned by foreigners.” He also pointed out that Lebanese chefs are trying to get Michelin star without realizing how much hard work and dedication is required. “In order to get a star, you need decades of experience and practical education. I have been working for a very long time, and it is only recently, over the past three years, that I have become recognized for what I do.”

New York-based chef and restaurateur Massoud expressed his passion for Lebanese cuisine. “I arrived as a refugee in the U.S. 36 years ago. Lebanese food was very poorly represented back then. Our cuisine is all about celebration; it is a reflection of the country. As a result of massive emigration, the cuisine left with the people and has reached faraway lands like Ecuador and Peru.”

He said that the beauty of Lebanese cuisine lies in its simplicity. “We used to eat what we grew, so the Lebanese table includes a lot of vegetarian dishes. This allows ingredients to shine.” He added that by “lightening” things up, Lebanese food has become more accessible. “Lebanon has 17 microclimates, so we do not always find the same ingredients here. At ilili, we execute Lebanese cuisine to the best of our ability, reproducing items in their best form.”

Massoud concluded that creative freedom is vital to the evolution of Lebanese cuisine. “Sadly, everyone in Lebanon is worrying about surviving instead of living and creating. It is important consider how to make things look appetizing without fiddling with the basics.”

Hadid stated that Lebanon has some fantastic ingredients and remains a major food hub but has been slow to evolve. “We have something no one else has. Our cuisine is extremely healthy, and there are certain flavors that are unique. However, we have been stagnant for a long time. We haven’t gone as far as we should have and given dishes a twist.”

Hadid added that there are ingredients that ought to be used more. “Hosrum and Bou Sfeir (bitter orange) are two undervalued ingredients.”

Barza, who entered the culinary world in 2000, spoke about the challenge of opening a Lebanese restaurant overseas. “Some local Lebanese concepts are sensational in Lebanon, but they are unable to succeed outside Lebanon because they are extremely classical. More modern establishments, such as Leila and Em Sherif and Babel, are doing extremely well abroad.”

He said that we have an advantage because we know how to market ourselves. “We have the charisma and know-how. We represent our cuisine in an optimal way everywhere we travel. However, we need to give ingredients proper value. In the end, it is all about what the client wants; some Lebanese are bored with classical food.”

Having developed a farm-to-table concept, Akiki said that the value of Lebanese cuisine lies in Lebanon’s terroir. “We have a rich selection of ingredients at our fingertips and a huge variety of flavors to choose from. Our cuisine is indeed influenced by surrounding countries, but what sets it apart is the remarkable climate of Lebanon that results in our produce tasting a certain way.”

Akiki emphasized that the job of Lebanese chefs and food ambassadors is to preserve the rich culinary heritage of Lebanon and remain true to it in our offering. “Every chef interprets Lebanese cuisine in their own way and based on their understanding of it.”

The panelists agreed that Lebanese cuisine is trendy because of its rich and healthy ingredients as well as its varied flavors. They said that it is possible to make the dishes more contemporary as long as the dish is respected and the basics remain the same.

In terms of ingredients, the chefs and entrepreneurs said that hosrum, bitter orange (Bou Sfeir), long leaf zaatar and Arabic cotton candy (ghazel el banet) are underrated. They stated that these items should be celebrated more.

The final webinar in the series, “How travel agencies and tour operators in Lebanon can adapt and innovate,” will take place on April 28. Click here to register.