Three official competitions, certified by World Coffee Events (WCE) and sanctioned by the Specialty Coffee Association (SCA), took place during the exhibition, with incredible displays of talent of skill by the region’s most passionate and talented baristas.

One of the oldest forms of coffee preparation that have existed throughout history in the Middle East, the Cezve/Ibrik employs traditional heated sand or a modern burner to heat a small pot with a distinct elongated handle to brew coffee. The UAE National Cezve/Ibrik Championship competition highlighted the skills and talents of the barista to showcase this traditional coffee preparation technique to produce an amazing cup of specialty coffee.

The UAE National Brewers Cup Championship competition showcases coffee preparation in its purest form as baristas demonstrate their high level of skill through filter coffee brewing, done entirely by hand. The competitors were tasked with preparing and serving three individual coffee beverages for a panel of judges.

An expert at tasting and distinguishing levels of quality and flavour differences in specialty coffee is called a cupper. By far the most exciting of all coffee competitions, the UAE National Cup Tasters Championship judged cuppers on their ability to exhibit accuracy and speed when drawing on their superior palate, sense of smell, attention to detail, and experience in choosing the cup of coffee that has an almost imperceptible difference in taste, out of three cups of almost identical coffees. 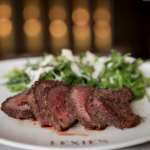