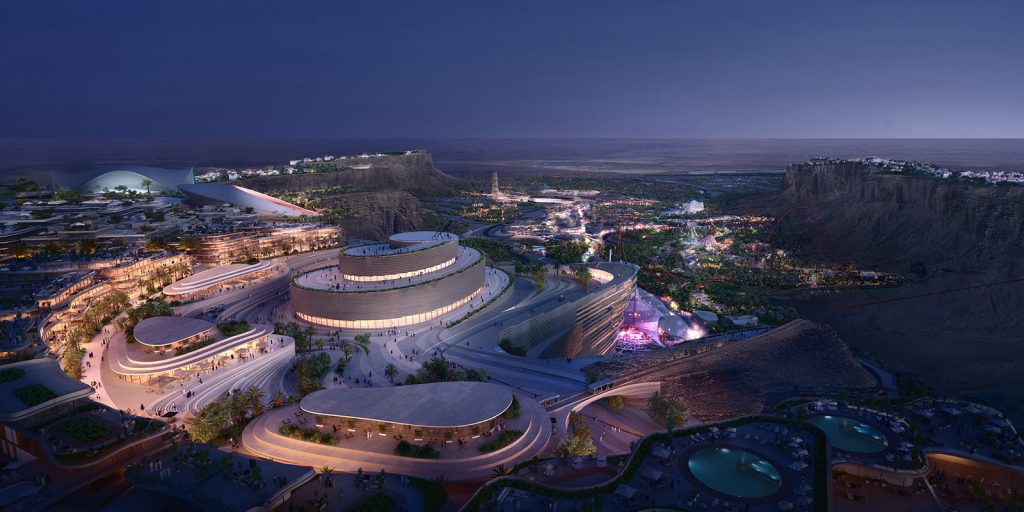 Massive investment in mega tourism projects to the tune of USD 810B is expected to transform Saudi Arabia to one of the largest leisure tourism industries in the world between now and 2030, according to research conducted by the Middle East and North Africa Leisure Attractions Council (MENALAC), the leisure and entertainment industry council representing the Middle East’s dynamic leisure attractions sector.

“Mega tourism projects being developed by the Public Investment Fund will be spread over an area of more than 64,634 square kilometers, with a value exceeding $810 billion,” according to Saudi Commission for Tourism and National Heritage (SCTH), the country’s tourism regulator.

Among these, the USD 500B Neom leads the list of the mega projects – which once completed, will deliver a futuristic mega sustainable city, followed by the USD 10B Qiddiyah Project, spread across 334 square kilometres in Riyadh.

Mishal Al Hokair, Board Member of MENALAC, said, “Saudi Arabia has an array of dynamic plans and attractions planned over the next few years, each of which will add to the fast growing Leisure and Entertainment sector. Its Vision 2030 will change the entire economic and tourism landscape of not only Saudi Arabia, but the entire Middle East region, which will have a massive positive knock-on effect on the leisure tourism industry.

“Once the current Covid-19 situation improves, the investment and development in the Saudi Arabia’s tourism sector will bring massive opportunities for the industry. It is time for everyone to prepare for the next big growth.”

In addition, SCTH will be developing museums in various Saudi regions, and preserving Saudi heritage with a cost of more than USD 1.3B.

The total number of inbound and outbound tourist trips in Saudi Arabia is expected to reach 62 million trips, where tourism revenues are anticipated to exceed USD 37B by the end of 2020.

“Therefore, it is anticipated to rank as the 24th on the scale of tourist business environment, and 124th in the international openness of tourism, and the 60th in the travel and tourism competitiveness indicator,” the report said.

Also, tourist facilities licensed by SCTH, have achieved a big growth over the past 10 years, especially in tourist accommodation.  In 2008, the number of tourist accommodations did not exceed 800 hotels, and hotel apartments.  In 2018 the number increased to 7,388.  The number of travel and tourism agencies went up from 589 to 2,414, with the presence of 633 tourist trips organisers.

Changes and growth in Saudi Arabia’s tourism landscape will help leisure attractions operators in the Middle East and North African countries. The recent reopening of the land borders by Saudi Authorities will help boost regional tourism in the GCC region.

SCTH plans to facilitate investment of SR171.05 billion that will boost the tourism industry capacity and the number of hotel rooms to 621,600 rooms and boost the tourism sector’s contribution to the GDP by 3.1 percent, and increase direct employment to 1.2 million jobs.

Prakash Vivekanand, Board Member of MENALAC, said, “The latest news from Saudi Arabia is very encouraging. The government wants to push ahead with the mega projects that will boost not only the country’s gross domestic product (GDP) but also the tourism sector. It will create massive opportunities for all the players in the leisure attractions business and we could count on an exciting future for the industry in the MENA region.”

According to Saudi Arabia’s General Investment Authority (SAGIA), the country wants to increase investment in recreational facilities to 6 per cent from the current 2.9 percent per annum – more than double the current level, as part of Saudi Vision 2030.

“In 2017, the Saudi Arabian tourism sector attracted investment of USD 28.6B, which was six times the world average in tourism capital investments,” according to a report by SAGIA. “Investments are expected to rise 5.5 per cent per annum over the next ten years to USD 54B per annum.”

Despite the current situation with regards to Covid-19, Saudi Arabia is pushing ahead with construction of some of these massive projects. A number of construction contracts have recently been awarded following the partial re-opening of the economy after the lockdown.

Rosa Tahmaseb, secretary general of Menalac, said: “The leisure attractions industry in the MENA region is upbeat with the new opportunities that are arising in Saudi Arabia. We see massive opportunities for our industry being created by more than a US$1 trillion investment in the Saudi Economy between now and 2030.

“I urge the leisure industry stakeholders, both our suppliers and operators to explore these opportunities and ascertain how they can take a leading role in helping Saudi Arabia develop its leisure facilities in the coming decade.

“Despite the short-term setback created by the Covid-19 pandemic, the long-term prospects for our industry remain bright. One example of this can be seen in the dynamic projects planned for Saudi Arabia.”

Tourism and entertainment are an essential part of the Saudi Vision 2030 which is aimed at diversifying the Saudi economy by reducing its dependence on oil. The Kingdom intends to develop versatile tourism destinations, which include several coastal sites, marvellous islands and distinguished heritage areas, all of which will require a high level of expertise, support and the most innovative attractions, technology and experiences to ensure the Kingdom becomes one of the top tourist and entertainment destinations in the Middle East within the next few years.