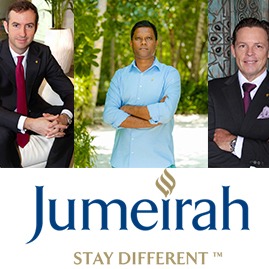 Jumeirah Group has announced three key appointments across its portfolio.

Mark Hehir has taken on the role of general manager at Jumeirah Zabeel Saray, the group’s Ottoman-inspired palace located on the iconic Palm Jumeirah in Dubai. With a wealth of experience in the hospitality industry over the last 38 years, his career has focused on commercial success by innovating resort concepts and driving commercial value through product development and operational excellence. With his roots as an executive chef, Hehir turned his attention to operations and excelled, taking on senior executive roles with major global hospitality brands across Asia, and later took on the role of CEO for The Small Maldives Island Co. From GM to CEO, Hehir has developed and managed high profile luxury resorts across the Maldives, Thailand and Bali, working for leading luxury brands including The Ritz Carlton, One & Only Resorts and Anantara.

In February 2022, Rafael González Ensesa stepped into the role of general manager at Jumeirah Living Marina Gate, Jumeirah Group’s servicedresidence in Dubai Marina. Ensesahas worked extensively in the luxury sector with brands such as The Ritz-Carlton, Four Seasons and Fairmont, across Europe, Asia, Indonesia and North America, rising through the ranks within hotel operations. In his role as general manager for Jumeirah Living Marina Gate, he is committed to demonstrating his creative approach to raising the bar for luxury urban living, and ensuring the Jumeirah brand DNA of Stay Different™ is brought to life across the property.

To head up the operations of Jumeirah Maldives Olhahali Island, the exclusive all-villa resort which opened to guests in October last year, Jumeirah Group has appointed Mohamed Ashraf as its general manager. Ashraf has a long-standing career in the luxury hospitality sector, spanning 20 years across Asia and the Indian Ocean. As a native Maldivian himself, he has earned an enviable reputation across the archipelago working at exclusive islands and luxury resorts for Four Seasons, One & Only Resorts, Anantara and more recently The Nautilus Maldives. Ashraf will oversee the property’s 67 spacious contemporary villas, Talise spa and signature dining venues, including award-winning restaurants Shimmers and Kayto.

DoubleTree by Hilton to debut in Fujairah