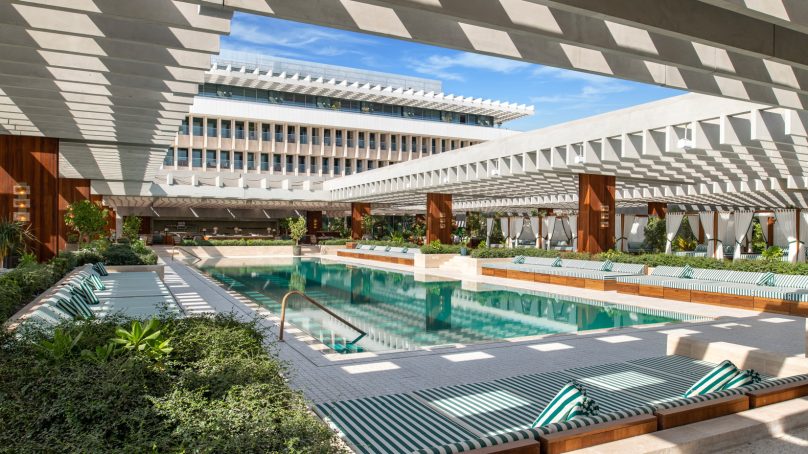 Ned hotel and members’ club opens The Ned Doha, its first location in the Middle East

Founded in London in 2017, The Ned is a hotel and members’ club. It expanded in 2022 with The Ned NoMad in New York and recently welcomed The Ned Doha, marking the club’s third branch and its first location in the Middle East.

Overlooking the Arabian Gulf and Doha’s skyline, The Ned Doha features 90 bedrooms and suites, six public restaurants, a pool and club lounge, a health club with spa, salon and fitness center, as well as a new event space for large-scale conferences, events and receptions.

Originally designed in the 1960s by Lebanese architect William Sednaoui, the building has been redesigned by David Chipperfield Architects of London, with interiors by Soho House Design. Drawing inspiration from The Ned’s original address in London, a stage for live performances is set beneath the atrium, which is surrounded by a collection of restaurants and rich green marble sourced from the Greek island of Tinos.

Gareth Banner, group managing director of The Ned, said: “Five years after launching The Ned in London, we are delighted to open in Doha. We are really excited to occupy one of the city’s most architecturally significant buildings, comprising a hotel, multiple restaurants and its own private members’ club. We look forward to providing our guests and members with a distinct experience, welcoming them to stay, connect, eat and have a good time.”

The Ned Doha celebrates local and regional creativity with an extensive collection of original artworks created by close to 100 artists, more than half of whom are based in Doha and nearly three-quarters of whom are female. Many of the artists drew inspiration from the modernist building and its important location.

A tour of the first vocational school in Lebanon with Mohamad Hachwi, CEO of BanoPuratos Group