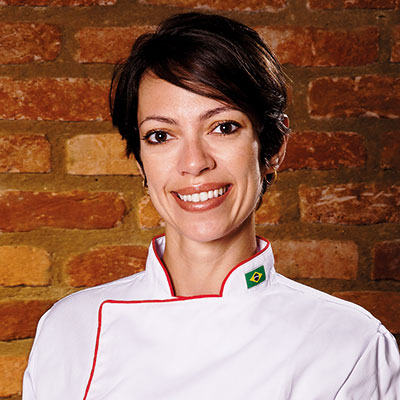 Read After: What’s Hot in Your Cup >

While looking to adopt a healthier lifestyle, Raquel Magalhães transformed her diet and enrolled in a four-year culinary program. Somewhere along the way, she found herself driven by a desire to disseminate the tea culture and its innumerable possibilities in recipes. As a result, she became a tea sommelier and university instructor, teaching her custom-tailored ‘Gastronomy with Tea’ course, the first of its kind in Brazil

Tea in food
Magalhães noted that you can cook any recipe with tea, from meat, fish and lamb to vegetables, fruits, sweets, cakes and even breads. “The possibilities are endless, only limited by imagination,” she said. “However, there are certain types of tea, such as white tea, that are very difficult to combine as an ingredient or pair with another dish because they have a very mild flavor and therefore deserve special care, consideration and respect” She added that irrespective of the variety, the starting point when it comes to using tea as a cooking ingredient is to follow a simple rule of thumb; combine lighter dishes with delicate teas and seasoned dishes with more intense and full-bodied tea varieties. “Another major consideration to take into account when choosing ingredients is ‘chewability’,” she noted. “For example, a cookie recipe which contains no liquid ingredients makes the infusion of any tea impossible. So in this particular case, adding the tea directly into the recipe becomes a must. The tricky part is finding the right tea, as it will need to be easily chewable and palatable in the mouth.” Magalhães explained that a chai, with harder spices like cinnamon, will not have the required ‘chewability’ unless used in powder form. “It’s worth noting that introducing matcha, an ultra-fine powdered green tea, to creamy recipes, such as yogurt and curds, works exceptionally well,” she said.

Tea in drinks
When it comes to tea in drinks, the pre-preparation is crucial for the success of the recipe, according to Magalhães. “Making this kind of syrup can take up to two-to-three hours before it’s cold enough to serve correctly,” she said. “So preparing it on the spot is not a possibility, as it needs time to cool down. That’s why storing this type of mix for later use, up to one month, is the best approach.”

The evolution
Magalhães also pointed to the growing abundance of high-quality loose-leaf tea brands available today. “This is creating a culture of tea followers with a thirst for knowledge and new, quality tea experiences,” she told HN. “That’s why the industry is returning to loose-leaf tea, rather than tea bags, with coffee shops, supermarkets and restaurants getting in on the trend. Cafés that previously served only coffee have cleared shelf space for specialty loose-leaf tea and restaurants are even offering a broader range of teas on their drinks’ menus.”

POPULAR TEAS IN THE MIDDLE EAST