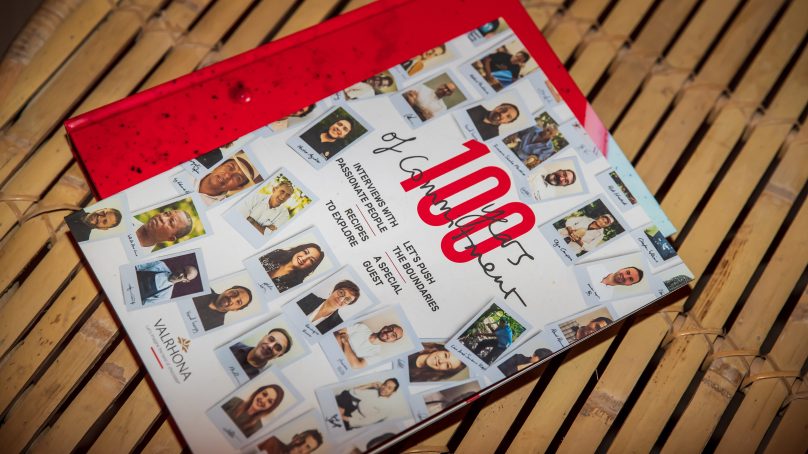 Throughout the year, Valrhona has been hosting the Food Forward Festival in eight cities around the world, bringing together chefs and talents to create a unique themed menu for each city. The festival, in partnership with GRAND CUISINE and GELINAZ, has celebrated Valrhona’s 100 years of inspiration, creativity and ethical gastronomy.

To mark the milestone event in Dubai, Valrhona invited a hand-picked selection of guests Cercle V and partners to an intimate dinner at Dubai’s National Reserve, giving them a sneak peek into the future of gastronomy and providing the brand with an opportunity to thank its clients for their loyalty, support and a shared sense of values. Attendees savored dishes from acclaimed chefs Reif Othman, Kasper Kurdahl, Sahar Parham Al Awadi, Himanshu Saini and Frédéric Bau while mingling with the guests and partners from Morocco, Tunisia, Turkey, UAE, Qatar, Oman, Kuwait, Saudi Arabia, Bahrain and India. The theme of the event was “Middle East Rising,” an ode to the rich flavors of the Levant and the Middle East. Indeed, Valrhona recognizes the growing trend for dishes from this region.

During the special gathering, Brice Konan-Ferrand, Valrhona’s pastry chef for IMEA, said: “I am happy to join Valrhona Selection IMEA in Dubai, having spent eight years in APAC for Ecole Valrhona Asia. It is the first time for me in this amazing city, and I am sure there are plenty of interesting things coming up.”

Frederic Bau, pastry explorer at Valrhona, added: “On the occasion of the 100th anniversary of Valrhona, 35 of which I spent creating and growing with the company, I am positive that the best is yet to come. Tonight is just a small example of what we can achieve.”

Guillaume Lafaix, IMEA business unit manager, expressed his gratitude to the team: “I would like to applaud the Valrhona team who made this wonderful event possible and who have ensured the success of the brand. A huge thank you to our chefs, partners and collaborators. I would also like to express our gratitude to M. Chapoutier, Dibba Bay and Nara Escape. ”

The 100-year anniversary of Valrhona has been commemorated in countless ways, including the unveiling of the brand’s latest creation, Komuntu 80%, which is inspired by Valrhona’s commitment to a fair, sustainable cocoa industry and creative, ethical gastronomy. Komuntu is the symbol of Valrhona’s joy, diversity, engagement and sustainability. It features a brightly colored pattern typical of the countries of origin of its cocoas, with artwork by French-Madagascan artist Deborah Desmada. It tells the story of all the people involved throughout the supply chain around the world. The blend of cocoas has a singular aromatic character, with a powerful bitter woody flavor underpinned with notes of toasted nibs.

Valrhona vows to remain true to its mission statement, “Together, good becomes better,” for decades to come, reaffirming its quest to further its positive impact on people and the planet. A century in the making, Valrhona, with the help of its cocoa partners, suppliers, apprentices, pastry chefs, bakers, chocolatiers, chefs, ice-cream producers, creators and connoisseurs, will further strengthen its commitment toward a fair and sustainable cocoa industry.

Furthermore, with dietary concerns for the future, Valrhona continues to reimagine how it chooses local ingredients, respects seasonality, recycles garbage, generates a circular economy, reduces wasted energy and food, respects biodiversity and showcases the value of community. The Ethical Gastronomy Handbook is available to support the Drôme branch’s partners through the transition so that everyone can take part and drive change.

Valrhona has been commemorating a century of milestones during a series of celebrations and events throughout 2022. From its ground-breaking innovations that introduced unparalleled signature flavors to the world of pastry, such as chocolate fèves, bitter Guanaja, and blond Dulcey, to new ways to sample and work with fruit, the brand has become synonymous with quality and creativity.

The story of Valrhona began in 1922, when pastry chef Albéric Guironnet organized a workshop in the Rhone Valley, France, and later developed a chocolate manufacturing business devoted to serving fellow chocolatiers, which he named Valrhona.

Valrhona’s chocolate-making facilities in Tain l’Hermitage – France remain to this day, faithful to the highly regarded and respected practices that have been passed down through the generations.

In 2002, the company formalized its sustainable development strategy via its “Live Long” program and works daily towards maintaining a fair and sustainable cocoa industry that respects people, natural resources and the planet. Indeed, 100 percent of cocoa beans can be traced back to their original plot, so Valrhona stays in contact with its 17,215 partner producers.

In 2013, Valrhona opened The Cite du Chocolat, a multi-sensory, interactive chocolate experience, gathering together 140,000 chocolate lovers, baking enthusiasts and professionals to taste, discover and learn some of the secrets that have made it the exceptional brand it is today.

Furthermore, through its work, the Valrhona Foundation has improved the living conditions of its producers by helping children gain access to education and by guiding them towards sustainable agricultural practices so that the supply chain is free from deforestation and biodiversity is preserved. In January 2020, Valrhona attained the B Corporation® certification, which is a testament to the company’s commitment to economic, societal and environmental performance.

Within this approach, Valrhona reaffirms its daily commitment to further making gastronomy ethical. The brand aims to create a collective movement in the gastronomy industry to challenge the status quo, work together and invent new ways of doing things.