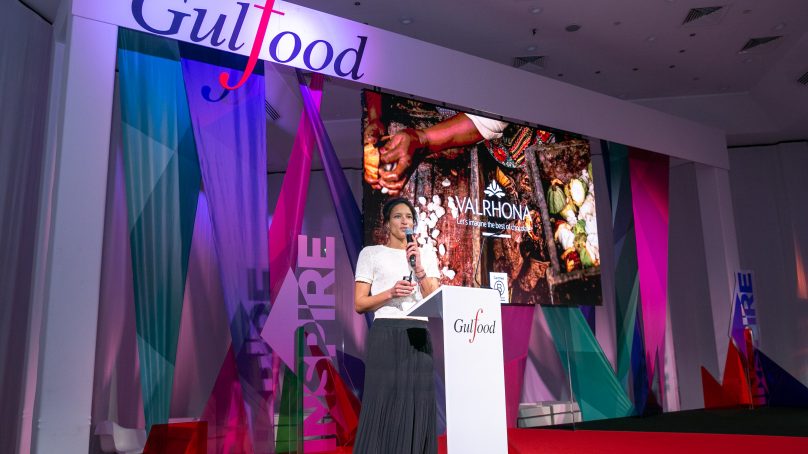 How Valrhona’s La Consigne scheme is making a positive impact on the environment?

In her presentation, she stressed on the company’s mission statement. “Together, let’s use good food to make the world a better place,” conveys the strength of Valrhona’s commitments and initiatives to radically transform the company and create a positive impact on the entire cocoa and chocolate sector. The company’s efforts were rewarded in 2020, when Valrhona received B Corporation® certification.

In 2019, with several of its partners and professional customers, Valrhona launched an innovative scheme to deliver chocolate bean in bulk in washable, reusable containers. By committing to this initiative, Valrhona started a movement and reconfirmed its determination to make a positive impact on the world.

The launch of the returnable packaging scheme, initially named “ComeBac,” had to be postponed at the start of the pandemic but was reintroduced in December 2020 with seven pastry chefs and chocolatiers in and around Lyon under a new name: La Consigne by Valrhona.

La Consigne by Valrhona consists of delivering Chocolate beans in 100 percent recyclable plastic containers that are made in Europe. These containers are then collected, washed, and reused for the next deliveries. The aim behind the initial trial was to assess the concept’s logistical viability and ensure that customers are happy with receiving their goods in reusable containers. The scheme’s first participants, all based in Lyon, expressed their satisfaction and even pride at being part of the change and contributing to a practical, environmentally friendly initiative.

Initially, Valrhona will organize logistics for 100 pastry chefs, chocolatiers and restaurateurs from the Lyon region. Each will have their own container that they can return to the company to be refilled. Indeed, Valrhona aims to deliver 24 tons of chocolate, saving the equivalent of one ton of packaging.

At the end of 2021, customers in Rhônes Alpes region were able to join and use the La Consigne by Valrhona returnable packaging scheme.

“It is vital that we take it step by step, as La Consigne by Valrhona will require us to make profound changes in the way we work, such as finding the right logistics partners to meet customers’ needs and guarantee the best possible experience,” said Juliana Lepan.

She enforces the fact that “even at a small scale, Valrhona representing 0,14% of the cocoa world production, 2/3 of the Michelin-starred Chefs are using Valrhona – which confirms the importance of quality, B Corp, CSR and the common effort to make a fair and sustainable Cocoa World. We welcome all actors in the Food Service sector to join Valrhona on this initiative to collectively create a bigger impact and make tomorrow a better place. ”

Dairy Diaries with four chefs from the region