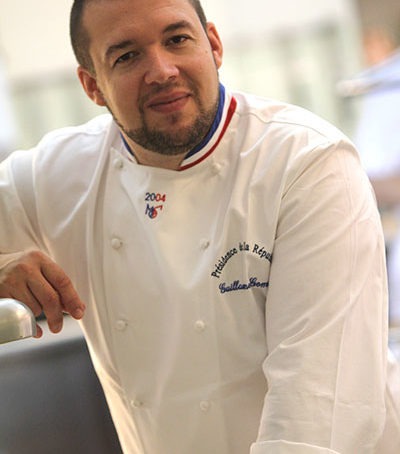 ESA business school, (École Supérieure des Affaires) held its annual one-day conference on June 7 to highlight the way French cuisine is employed as a vehicle to promote diplomacy and soft power. The event is in partnership with the CCI France-Lebanon Meref, which constitutes a group of French and Lebanese entities operating in Lebanon on economic and cultural agreements between the two countries.

This year’s theme was ‘The French way of life in the service of diplomacy’. Speaking at the event were Stanislas Verpoort, Head of the Independent Service at the Elysée Palace alongside Head Chef at the palace, Guillaume Gomez. Following the conference, HN caught-up with the star chef and winner of the best French cuisine book in the world 2018 titled, ‘Cuisine: leçons en pas à pas’ (which stands for ‘Step by step lessons for cooking’) to learn more about the importance of gastro-diplomacy, his book and other relevant matters.

“At ESA, I discussed, at length, the work that we do and the experience I have had a year into my residency at the Elysée Palace. Soft power, was another topic tackled and the numerous ways French cuisine is used as a communication vehicle for transmitting our beliefs, history, culture and craftsmanship. The really interesting issue that holds special interest for me is that despite the differences that set the peoples of this world apart, the one indivisible element that unites all of us is food. As such, it plays a major unifying role and opens the door to healthy and honest exchange of ideas,” he clarified.

Despite the fact that gastro-diplomacy dates back to the Napoleonic era and maybe even prior to that, its importance has become more relevant today than ever before. On that note, Gomez, being a staunch supporter of this movement commented on his award-winning book saying, “In France, chefs are renowned for their products and their techniques. The way I approached the subject in my book is by demonstrating the various ways every featured dish can be prepared to highlight the richness and diversity of French cuisine. The book, which weighs 3 Kg. contains 72 recipes and more than 4,000 pictures that clearly illustrate the ways each dish is prepared. At the moment, the book is only available in French, however, I hope to see it translated into many other languages. With the help of a huge team, we managed to complete the work in 8 months and the result speaks for itself.”

Another effective vehicle for the dissemination of such wealth Gomez remarked are the annual culinary events held throughout the world and when it comes to Lebanon, HORECA tops the charts. “This event is the main reason why I first visited Lebanon and was delightfully surprised to learn about all the wonderful local dishes and flavors. Ever since, I have always made it a point to find the time to attend, as the event is of major importance to global gastronomy. The competitions are phenomenal and help in raising the level of craftsmanship every year. The event also helps promote the local tourism industry through the participation of all the international professionals in attendance. The other reason why I love HORECA is because I consider it to be an event the likes of which the world has never seen and I am happy to be part of it every year. It also is a great opportunity to experience the mouth-watering creations and discuss other culinary related topics with chefs from all over the world whom otherwise I would not have had the chance to know,” Gomez concluded.