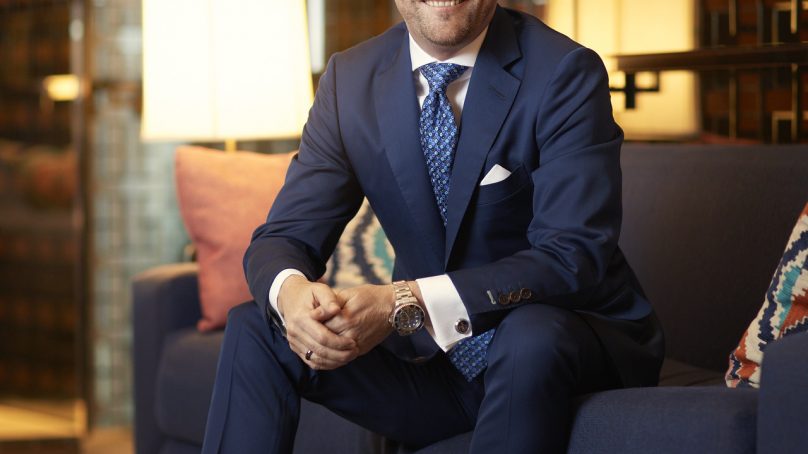 With a hospitality career spanning over 35 years, Simon Casson knows a thing or two about hotels. From the early days of washing dishes in a kitchen in the north of England to his current position as president of hotel operations for Europe, the Middle East and Africa at Four Seasons, Casson’s rise through the ranks is nothing short of remarkable. Here, he shares his inspiring journey and tells us why his close relationship with Four Seasons has survived more than three decades.

How did your career in hospitality begin?
I was quite fortunate because I knew what I wanted to do at the age of 15. Although I wasn’t particularly academic — I left school at the age of 16 — my mother was extremely supportive. It was a case of me working my way up. I waited tables, became a room attendant and worked as a porter in numerous small hotels around the UK, including properties in Torquay and Plymouth. At one point, I was the cocktail barman at Oakley Court, a luxury hotel in Windsor. Being exposed to this world while still in my teens was a huge learning curve.
After two years in the industry, I was awarded the Management Trainee of the Year award, which was definitely a turning point. Kit Chapman, a well-known hotelier, contacted me and asked me to join his hotel in Taunton: The Castle Hotel. At the time, chef Gary Rhodes was running the kitchen, and I was in charge of the front of house. I spent two wonderful years there and was just 20 when I first heard about Four Seasons. Back then the brand was relatively small, with just 15 hotels in the States and one hotel in London. Kit contacted the GM of the Four Seasons in London, and that’s when my journey with the brand started.

Why have you remained with Four Seasons for over 30 years?
I suppose I come from a generation that considers it honorable to spend one’s career at the same company. I don’t think that it’s viewed that way anymore. The reason I have stayed with Four Seasons is because I kept growing. New opportunities were constantly put in front of me, and Four Seasons believed in me. They provided challenges, so I was never bored. Having grown up in a little village in the north of England and being given the chance to spend 10 years in America was something quite extraordinary. I have opened hotels around the world and have spent the past 20 years in the Middle East. I haven’t hit a ceiling. Usually, employees leave if they are not promoted or don’t feel appreciated — things that I’ve not experienced. My values are aligned with the ethos of Four Seasons, and I feel it has been worthwhile to dedicate my professional life to this brand.

Can you tell us about a defining moment in your career?
I was the assistant FOM at Four Seasons in London and shifted to rooms and then to F&B. As the room service manager, I was responsible for a large team, but I failed to recognize the difference between management and leadership. Due to my behavior, around 40 employees went on strike. It was a moment that I won’t forget, because I felt like a failure and lost my self-confidence. The role was probably too big for me at that age. However, it taught me something incredibly valuable: a leader is a title one must earn. I’m glad I was able to understand that early on.

What are you finding most rewarding about your current position?
There’s nothing quite like seeing your staff progress and succeed. Interacting with people, watching them grow and inspiring them is so rewarding. My race is largely run, so now I take great pleasure in coaching and mentoring. It’s like raising children.

What is your motto?
I’m a great music lover, thus I am never without music. There is a song by Nat King Cole called Nature Boy, in which he sings: “The greatest thing you’ll ever learn is to just to love and be loved in return.” These words resonate with me for two reasons: the act of loving and the importance of self-love and acceptance. Although it is not directly related to business, I think I have inspired others because of these qualities.

How challenging have you found the past 18 months?
The past year and a half has been significantly negative, and we cannot underestimate the impact of the pandemic. I oversee 42 properties in 26 countries, three quarters of which closed at some point in the last 18 months.
On a positive note, there have been some green shoots in the form of resort properties where occupancy levels have remained high: Dubai, Greece and the South of France, for example. However, the average occupancy rate in the Middle East is around 45 percent, so we are not through it yet. Overall, I consider 2020 as crisis year, this year as the start of recovery, 2022 as a full year of recovery and 2023 the year that things stabilize.

What’s coming up for Four Seasons?
In terms of new projects, we have a stunning new property in Taormina, Sicily, which is a 700-year-old former convent. We have close to 30 new hotel deals in the pipeline in places such as Marbella, Mykonos, Puglia and Rabat, so there is significant development activity.
I am particularly excited about what’s happening in the Middle East. In KSA, we have plans to expand, in line with Vision 2030, and there are other projects in progress including renovations, our Doha renovation being one of the most significant. We are also keeping a close eye on Beirut, a city we have great admiration for, and we are in regular contact with the team there as we follow the refurbishment works.

How do you foresee the future of the industry?
Everyone wants to travel; there is pent-up demand. People are prepared to spend more money on their holidays, so we are witnessing double-budget travel. Of course travelers want to feel safe and secure wherever they go. At Four Seasons, we have a consulting agreement with John Hopkins to ensure that our procedures are approved and verified. We are given advice regarding individual properties and learning how to handle pandemic-related issues: when to isolate, which masks to use, how to respond to an outbreak, etc. We believe that this provides even greater confidence in the brand. Addressing the mental health of our employees, who have endured so much, is also fundamental, which is why we have enlisted the help of mental health professionals to provide additional support.
I’m optimistic about the future; now is the time to show leadership.