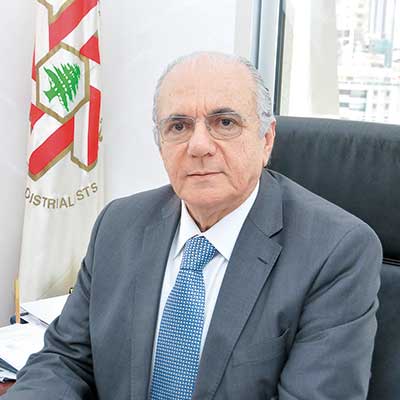 George Nasraoui is a man of many talents. Not only was he able to establish his firm during the Lebanese civil war, but he also managed to expand it on international scale. Here, the founder and CEO of food manufacturing company Sonaco Al-Rabih and VP of the Association of Lebanese Industrialists takes us on a trip down memory lane and discusses what the future holds for his company.

How did it all start?
The Lebanese civil war first broke out in 1975, which is when the Sonaco narrative really began. I had a different specialty back then, and the conflict rendered Downtown Beirut inaccessible; it was where my office was located. As a newlywed, I had to choose between staying in Lebanon or leaving, so I chose to stay. I soon realized there were no longer any tahini or halawa companies in my neighborhood, as they were all destroyed during the war. It was then that a friend of mine, a supermarket owner, asked me to source the products from Cyprus. Instead, I decided to open a tahini and halawa factory in my community to meet the local demand,  which I inaugurated in 1976. This also marked the beginning of our production.

What is the story behind Sonaco and Al Rabih?
Sonaco stands for Societe Nasraoui and company. As for Al Rabih, choosing a name that was both Lebanese and Middle Eastern was challenging. Although we came up with various options, Al Rabih was the name people identified with the most; it sounded nice and reminded us of spring.

What can you tell us about Al Rabih’s slogan “your favorite Lebanese taste all over the world” and how you’re honoring this pledge?
When I first launched Sonaco, I was aware of how small the Lebanese market was, which is why all along the goal was to export our goods abroad. I wanted  my products to reach Lebanese and Middle Eastern diaspora all over the world.
We started exporting to the GCC in 1978 after optimizing our factory and production capacity. During this time, my goal was to industrialize and modernize production. I began traveling throughout Europe in search of innovative ways to process sesame, from which we make tahini. Thanks to seven to 10 years of cooperation with a factory in Spain, I became the first Lebanese producer to transition from mechanical to automated production.

What are the latest food innovations and trends shaping the industry and how are you leveraging them?
For an ambitious person like myself, it was necessary  to  expand beyond Lebanon. Through my exports, I began to understand the needs and desires of Lebanese and Middle Eastern consumers, which led me to broaden my product line and develop them. I became specialized in pan-Arab food production, with around 120 products. Some of our main products include tahini, halawa, hummus, oils, jams, olives, pickles, rose water, orange blossom water, pomegranate molasses and Mediterranean canned food.
Every year, we expand our product offering. Our latest edition, which we also export, is the canned pre-cooked meals with a two-year shelf life, such as stuffed grape leaves, stuffed zucchini, Lebanese green beans with extra virgin olive oil (loubié bi zeit).
Keeping up with modern times, people no longer have  the time to cook at home; they buy pre-cooked meals, which is why I am optimizing this product segment.
Furthermore, I am expanding beyond the GCC and taking part in food trade expos. Back in 1978, SONACO S.A.R.L – AL RABIH was the first Lebanese company to participate in SIAL Paris. Since then, we have been taking part in international food shows every year, such as Anuga Germany, SIAL Paris and Fancy Food Show USA, which has helped us grow our client base and network globally.
For 11 years, I was the deputy chairman of the Association of Lebanese Industrialists as well as the Dean of Lebanese Food Industries and worked on having a Lebanese pavilion at each international food trade show, such as HORECA, Gulfood and so forth. We began with a few industrialists and developed into a sizable Lebanese pavilion under the Lebanese flag. Fellow industrialists reaped the benefits from such exposure, and we were all able to put Lebanese products on the international culinary map. On this note, I would like to thank them for their faith and support.

How does it feel to work with your three sons?
I remain ambitious and work toward excellence. Each of my sons oversees a department that matches his expertise. They are really helpful, and I rely on them to improve and modernize our manufacturing. The factory now has an in-house lab that helps us comply with each country’s export requirements. We also have a labeling department that produces labels according to each country’s guidelines.
I first started the business as a one-man show, but it has developed and evolved with the industry.

Under your guidance, how do you foresee the future of the company?
Several Arab investors wanted me to open factories abroad, but I was always adamant about focusing on Lebanon and being the culinary ambassador of Lebanese cuisine.
Sadly, with all the ordeals we have suffered and the government’s neglect of the sector, my sons would like us to branch outside Lebanon. We are weighing our options to decide where to open a new factory abroad.