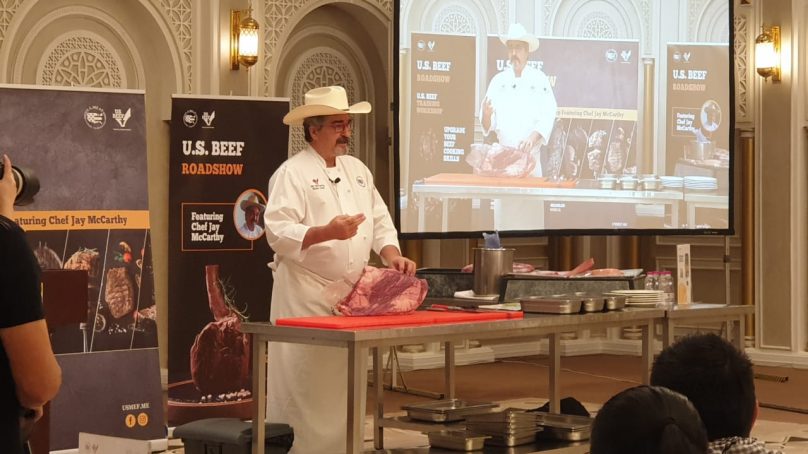 A U.S. beef roadshow to remember

The U.S. Meat Export Federation (USMEF), represented in the GCC region and Egypt by Arab Marketing and Finance, Inc. (AMFI) S.A.L., invited importers, retailers, distributors, chefs, influencers and bloggers to attend a U.S. Beef Roadshow, which consisted of a series of U.S. Beef Training Workshops and featured Chef Jay McCarthy, a well-known chef with sound expertise and years of experience in the field.

Attendees also enjoyed a series of live cutting demonstrations, and sampling of a variety of high-quality and underutilized beef cuts, such as striploin, tri-tip, ribeye, short ribs, chuck roast, flank and brisket. Discussions also took place regarding the factors that make U.S. Beef superior and highly sought after.

Sharing his expertise on what makes U.S. beef so special, McCarthy spoke about how beef gets from pasture to plate emphasizing on the different steps being implemented to ensure a consistent supply of high quality and safe beef to the growing local and global community. He also explained quality-control processes and how access to an abundant food source translates into meat with a consistent flavor profile.

Being a hands-on chef, McCarthy’s workshops involved chuck roast breakdown, a demonstration of each of a variety of cuts such as brisket, striploin, ribeye, topside and short ribs, in addition to the recommended cooking method and applications for each.

The U.S. Meat Export Federation (USMEF) is a non-profit trade association that works to create new opportunities and develop existing international markets for U.S. red meat. Its mission is “to increase the value and profitability of U.S. beef and lamb industries by enhancing demand for their products in export markets through a dynamic partnership of all stakeholders.