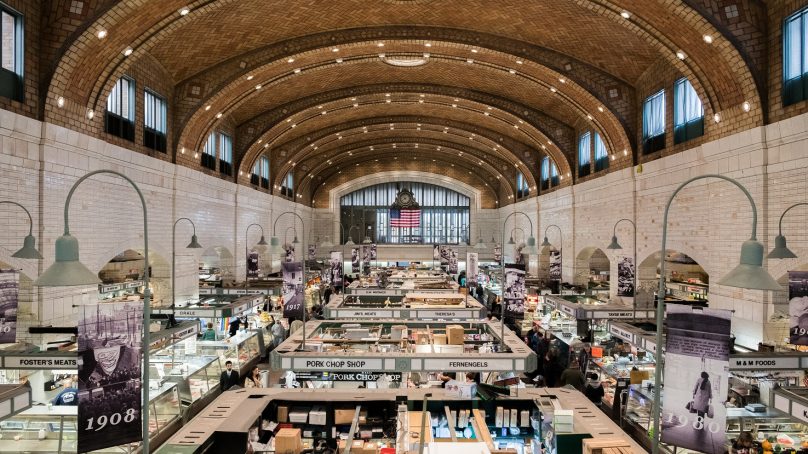 The food and beverage (F&B) industry is always on the lookout for new ideas, while reinventing itself over and over again. When it’s not about changes to the food on your plate, it’s about the setting and the decor. In recent months, restaurant operators have joined forces with their retail counterparts to develop a new mode of eating out. Food halls are clusters of pop-up restaurants, counters and streetfood vendors, all brought together in a large retail space. Halfway between a traditional food market, but with a seating option around or near the counters, and a food truck, where the cook prepares fresh dishes in front of your eyes, food halls offer a wide variety of cuisines, from cheap falafels to pricey caviar. The keywords are quality and authenticity, while the idea is to ditch the fancy service and decor of standalone restaurants, but without compromising on the standard of food.

The world on a plate
Pioneers include Boston’s iconic Quincy Market and famed British department store Harrods, where several world cuisines are prepared in front of awed customers who can try them, freshly cooked, at the counter. The concept has since snowballed around the globe in many major cities, becoming more cutting edge and affordable in the process. London is host to Asian food hall Bang Bang Oriental, located in a modern, indoor market space, among others, and will also welcome the highly anticipated Eataly in 2020. The latter, described as a ‘foodie theme park’, is already up and running in 12 cities, including Tokyo, Moscow, NYC, Istanbul, Dubai and Riyadh. Another venture – La Felicita – is causing a buzz in Paris. While communal-style dining dates back hundreds of years to banquets, taverns and food bazaars, in recent times, F&B establishments shifted toward a more private way of dining. But the rise of quick service restaurants (QSR) after World War II has gradually led to the reemergence of shared seating areas. The huge popularity of the mall culture, where people could spend their whole day flitting between shops, eateries and activities under one roof, gave an added boost to the concept, coining the description ‘food courts’ in the process. These specific areas reserved for food outlets became extremely popular among mall-goers, while foodies looking for refined dishes would still turn to restaurants.

Something for everyone
Food halls provide wider choices for diners, offering cuisines from around the world, made with fresh ingredients, in a market-like ambiance. QSR fans can still take advantage of the no-fuss and quick ordering systems, while connoisseurs can chat directly with up-and-coming chefs. Health-conscious individuals are also better informed on the ingredients’ origins, since there are no intermediaries between them and the cook. “I never liked the word food court because in my opinion it cheapens the quality of food. A food hall promises an experience! Food is an experience and should be respected and brought forward,” blogger and food critic Anthony Rahayel (nogarlicnoonions. com) wrote. In the food hall, each eatery is hand-picked and advertised as the best in its game. The bright lights, plastic cups and loud music characterizing standardized food courts have gone, replaced in food halls by traditional products and lowkey decor celebrating the cuisines they promote. The huge success of food markets worldwide is also benefiting them, attracting foodies looking for a seated option, perched on stools around tiny countertops. Food halls have become so popular that many have been turned into touristic destinations in their own rights.

Cheaper startup costs
But food halls are not only a disrupter for clients; they are also redefining both retail and food services, and have quickly become a favorite among real estate developers. Taking the ‘quick casual’ segment – increasingly favored in Western countries – by storm, they are now attracting F&B developers and operators. They can also be a saving grace for malls running out of steam and looking to fill their vacant spaces. But those standing to gain the most are small F&B entrepreneurs, who can start and operate a business for less within a larger structure. The food hall enables them to put their F&B concept to the test with month-to-month rentals, providing opportunities for individuals who would never have had the mandatory startup funds to open a standalone establishment and pay the required rent and taxes. While some still end up opening a restaurant of their own, others can decide to keep a smaller and more flexible format.

Building on the mall culture
Like all global trends, food halls are slowly arriving in the Middle East, where food courts and clusters – a conglomerate of restaurants in the same street or area – have already become part of people’s eating habits. The GCC mall culture has not only helped to make these venues increasingly popular as go-to destinations for all-round leisure and entertainment, but is also playing a major role in the success of food courts. Lebanon, where several malls have opened in recent years, is following the same trend, despite retaining its street restaurant tradition. Clusters have also attracted loyal followings across Beirut and its suburbs. Rabih Saba, managing partner at Venture Group, believes food halls are certainly a trend that has yet to reach the Middle East region, particularly Lebanon, where the market is not yet sufficiently mature. “Investors in such projects need more stability and long-term leases, preferring to rent renowned brands in order to secure returns on investment, rather than betting on new brands with higher turnover that are less secure,” he said. “We will definitely be welcoming this trend when the market is ready for it.” However, the first steps have already been taken, with food markets and festivals attracting large crowds across the region, such as Souk al-Akel in Lebanon and the Dubai Food Festival. Some malls have also started opening food halls, such as American celebrity chef Todd English in Dubai Mall, although the concept remains closer to a giant restaurant, with waiters despite its 12 different stations. “Such food hall concepts need a cosmopolitan city with more pedestrians, which is not currently the case in the region,” said Tommy Kargatzidis, head chef and co-owner of Baron Beirut, currently developing a new restaurant in Lisbon. “However, Time- Out Market, which is currently located in Lisbon, Miami, Boston and New York, is expected to open at the end of 2020 in Souk Al Bahar in Dubai.”

“Food halls provide wider choices for diners, offering cuisines from around the world, made with fresh ingredients, in a market-like ambiance. QSR fans can still take advantage of the no-fuss and quick ordering systems, while connoisseurs can chat directly with up-and-coming chefs”