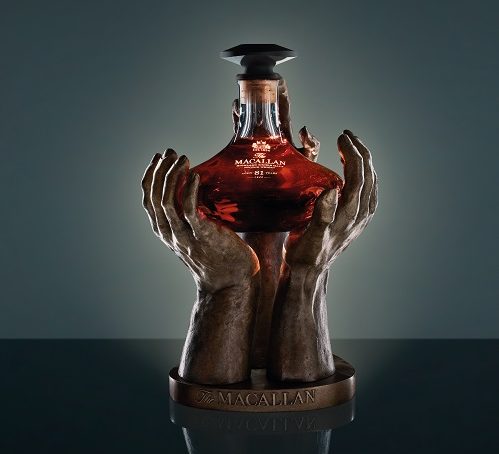 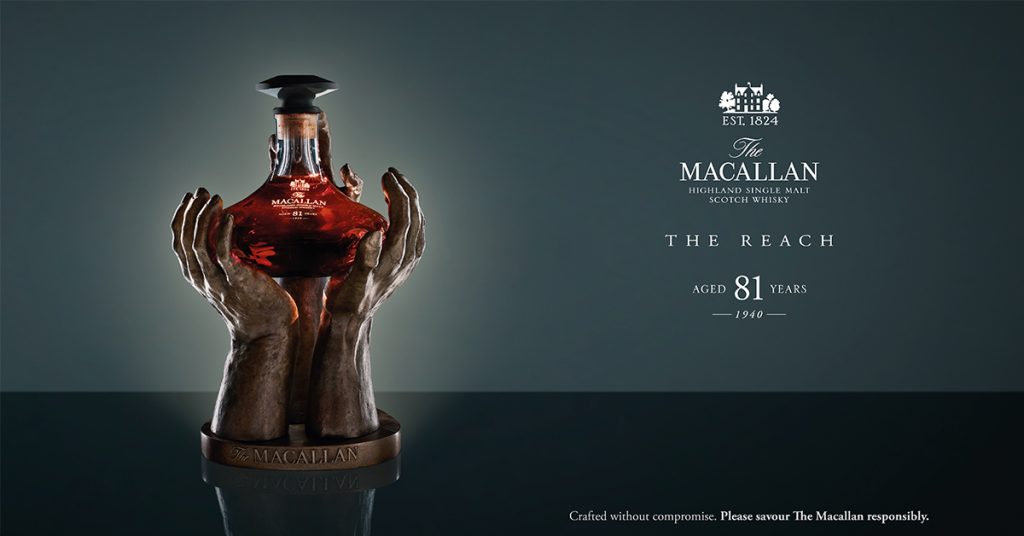 The Macallan has unveiled The Reach, a single malt whisky that was crafted during the Second World War. The Reach was laid to rest in 1940 before The Macallan was compelled to close its doors for the first time in its history.

Its existence is a testament to the care and commitment to excellence that has driven The Macallan since it was founded in 1824. It also pays tribute to those who strived amid great adversity to resume distilling The Macallan’s spirit, as well as the craftspeople today who continue to uphold the brand’s values.

A rare 81-year-old single malt, The Reach is the oldest whisky ever released by The Macallan, crafted from a single, sherry seasoned oak cask. The dark, precious whisky is encased in an exquisite decanter created from mouth-blown hot glass, cradled on a bronze sculpture. Sculptor Saskia Robinson created the timeless sculpture, which features three hands. Each hand represents characters in The Macallan’s history. One commemorates the distillery workers of 1940 who crafted the spirit into existence. Another is the hand of one-time chairman Allan Shiach, whose grandfather headed the company when this remarkable spirit was first consigned to its cask. The third is that of today’s Master Whisky Maker Kirsteen Campbell, who carefully selected the 1940 cask used to create The Reach, deciding that now was the time to share this precious whisky with the world.

Campbell said: “It is an honor to introduce The Reach. Created during a turbulent time in the world, this extraordinary expression showcases The Macallan’s history, ingenuity and unmistakable strength of character. The creation of many hands, The Reach has been a truly collaborative effort. It’s also a tribute to the people who made this precious whisky, and their enduring spirit which never wavered.”

She added: “Its deep auburn hue is the first hint of this remarkable whisky’s astonishing depth. Offering notes of dark chocolate, sweet cinnamon and aromatic peat, leading on to treacle toffee, crystalized ginger and charred pineapple, before giving way to an intensely rich, sweet and smoky finish.”

Limited to just 288 decanters worldwide, The Reach will be on display at The Macallan Estate Boutique from February 9, 2022, and later in The Macallan domestic and travel retail boutiques. The RSP is USD 125,000.

Alwatania Poultry: a legacy in the making